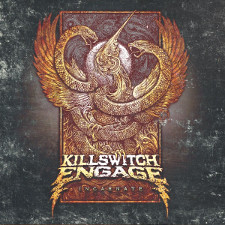 I’m sure many of you remember the “New Wave of American Heavy Metal” trend. There was a plethora of bands pushing that barrow including Lamb of God, Unearth, Shadows Fall and of course, Killswitch Engage. Now, it’s probably fair to say that both Lamb of God and Killswitch Engage were the biggest proponents of the scene even though both musically had very different agendas. Hailing from Westfield, Massachusetts, U.S.A., the band made an undeniably massive imprint on the history of metal with their sophomore album from 2002, Alive or Just Breathing. It was a landmark album that not only garnered the quintet a legion of fans, but also forever changed the landscape of the metal scene, to the point that it is still hailed as the band’s best work to this day, some fourteen years later.

Now, Killswitch Engage have undergone the vocalist swap akin to Anthrax and with similar results. It’s divided the fan base, and to an extent it seems fans think they were stronger first time around with rapturous praise upon the return of frontman Jesse Leach equivalent of that of the second coming of Prodigal Son. From an outsider looking in perspective, I see one thing - an overall consistency with the style of metal that Killswitch Engage produce, regardless of who is rockin’ the mic out front. Sure there are vocal differences chock full of pros and cons both ways that come with that territory as well, but the constant still remains. Whilst fans warmed to former vocalist Howard Jones for The End of Heartache (2004), I think it’s safe to say that by the time Leach had returned, the fan base breathed a collective sigh of relief after the group very much slipped into metal by numbers mode after three albums with Jones out front.

But for those who aren’t quite as biased in their opinions of Killswitch Engage (aka those who can criticise the band and not go totally gaga at everything they do), it’s a different story. Sure, they’ve made their mark and Leach is back, etc etc. The collective “we” get it. 2016 sees album number two released since the return of Leach out front. Dubbed Incarnate, the album leaves little doubt that guitarists Joel Stroetzel and Adam Dutkiewicz are more than doing their share. There are plenty of chugga-chugga riffs, crazy pick squeals and metalcore friendly breakdowns. Backed by the rhythm section of drummer Justin Foley and bassist Mike D’Antonio, and I think it’s fair to say Incarnate is a stronger album than their last outing, 2013’s Disarm the Dissent. Put all this in the mix and it’s everything a Killswitch Engage fan will want. There really is nothing here that will disappoint KSE fans that are already frothing at the mouth. From the gentle “Embrace the Journey ... Upraised” through to heavier “The Great Deceit”, Killswitch Engage fans will go batshit crazy over this album too. Rightly so as it delivers everything they expect from the band with the line-up they adore.

For everyone else who manages to maintain a critical standpoint when it comes to anything at all, well, I can’t help but feel that Incarnate is typical Killswitch Engage. There’s nothing here that, to my ears at least, will convert naysayers. Does it hold true to the ode from Brian Posehn? Metal by numbers? Well, it surely feels that way. Incarnate isn’t bad by any means. In the grand scheme of the band’s discography and metalcore as a genre, it’s decent enough. Amazing? No, but it is solid. Will I get hate mail for this? Probably. Hopefully. Does it hold a candle to the band’s finest hour? No, it doesn’t but it’s still better than anything in the last dozen years.