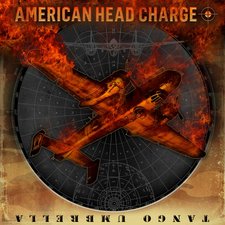 Drugs, breakups, reunions, and death – all too common a thread of themes in the music business, and Minneapolis’ American Head Charge are another one of those bands. It’s been just over ten years since the band’s last album, The Feeding, and the success of songs like “Loyalty” and the reunion has spawned Tango Umbrella.

I still remember picking up 2001’s The War of Art upon its release; unfamiliar with American Head Charge and relatively new to the rise of nu-metal and the modern take on the industrial side of metal too. “Just So You Know” was just one in a collection of other songs that were catchy, heavy-ish, and carried a good degree of originality that set these guys apart. When The Feeding came along four years later, I recall only the disappointment. Tastes in music evolve and I had already moved in a direction away from nu-metal so this opinion was formed within a certain and relevant context. Nevertheless, The Feeding lacked that edge The War of Art possessed.

Vocalist Cameron Heacock and bassist Chad Hanks are the only two remaining members and they have the trying task of being measured against what the band put out prior to its break-up. They hadn’t been around for very long before things fell apart so there was no significant degree of growth or development that American Head Charge had to its name. Trepanation (1999) made an impact, The War of Art solidified a reputation, and then The Feeding fell a bit short all before things came abruptly to an end. Cue Tango Umbrella.

The album lacks a lot of purpose. Where the hell are all those riffs and that crushing tempo? You hear more of Heacock than anything else. Sure, he has a decent vocal range but it’s a bit overbearing. “Suffer Elegantly” is the only time I was slightly drawn in – shades of past grit and a mechanic power. “A King Among Men” prior to this is the complete opposite and a strange meander off course. The entire album is scattered with interesting and often tasteful uses of keyboards and samples and teasing moments where some tempo signatures could build up and unravel, but simply dissolve into placid songs.

This is not the same band it once was, even if it was for a brief time. There is a clinging to the industrial elements, but it is all amounting to nu-metal with a diluted core of melody. Tango Umbrella is not sloppy, it is just uninspired.