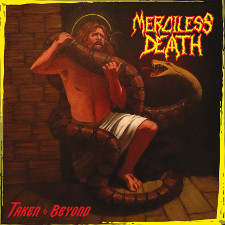 I’m never really sure what to make of bands that share their name with a song from another, usually older, metal band. In some cases, things work out OK to varying degrees of success. Just for a minute think about the likes of Deep Purple, Overkill, Jesu, Rage, Running Wild, Seether, Revel In Flesh, Bonded By Blood, and New Race to name but a few. Other times, perhaps not. Take for instance, Bury Your Dead, Pierce The Veil, Right Said Fred and Veil Of Maya. Sure both lists are diverse at somewhat eclectic, but, you get my point, right? All this waffle brings me to California (U.S.A.) modern thrash act Merciless Death.

With a name taken from the song of the same name by legendary Los Angeles thrashers Dark Angel, you’d expect just about the same from Merciless Death… or thereabouts. Truth is, they are total worshippers at the altar of old school ‘80’s thrash. Now whilst they band have claimed their name isn’t taken from the classic Dark Angel song, given their undisputed love of thrash, I think it’s fair for one to think that is exactly where they got their name from. You know what? That’s not a bad thing either. With their first two album, 2006’s Evil in the Night and 2008’s Realm of Terror, it was clear the band were doing their namesake proud.

Formed in 2004, after the release of the sophomore long player, the band went on hiatus. There’s that damn word again. Go read my review Devildriver’s Trust No One if you want to know why I’ve made that comment. Anyways, almost eight years later and sans any kind of label support initially, Merciless Death took it upon themselves to self release their all important third slab of thrash, titled Taken Beyond. Soon after it was taken up by European label High Roller Records which is how it landed in my in-tray a couple of weeks ago.

Suffice to say that after their time away from the modern thrash scene, things haven’t changed too much in the Merciless Death camp. Taken Beyond is as retro thrash as you’d expect in every regard. The thing here is that Merciless Death are doing as not only they have always done but as others in this genre – both old and new – have done as well. Is it metal by numbers, or thrash by numbers? Well, yeah, it kinda is. To a point, that is what Merciless Death has always done and there are no surprises on album number three, either. Musically, structure wise, riff wise, dynamics wise, that holds true. If anything, the only surprise is the semi demo like production that manages to take the shine off things here. To be fair, Taken Beyond isn’t "garage grade" or "rare unearthed after a quarter of a century" sounding. Not in the least. But in all honesty, it’s more raw studio demo sounding than it is finished studio recording sounding... if that makes sense.

Other than the production, there’s nothing new here as far as Merciless Death go. I’m not sure of the impact the production choices will have on the band’s future at this point. In all honestly, I can see both for and against arguments as it stands now. They might not be mind blowing at this point, but the consistency is there enough that I think fans will check this out and keep an eye on them if they decide to grace us with another future release.