Graveyard Classics IV: The Number of the Priest 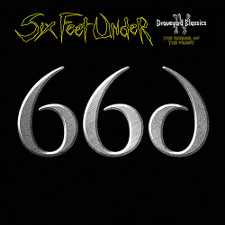 There’s no doubt that Six Feet Under have an audience. It might not be a large audience but in this age where genres are so splintered and no one particular style dominates metal or in fact defines metal these days, it must be said that Six Feet Under do have their place. Where that sits within the grand scheme of everything, well, that’s very subjective. Formed in 1993, Six Feet Under have defied the ever changing tide of the music biz and are still going strong with eleven studio albums under their belt alongside a handful of covers albums under the moniker Graveyard Classics. The fourth in this often painful series is dubbed The Number of the Priest and there are no prizes for guessing the artists getting a remake here.

I’m not really sure who this collection of down-tuned metal classics with one dimensional, growled vocals is aimed at. You’d be sorely mistaken if you ever thought that vocalist and band founder Chris Barnes would actually sing on any of these classics from Iron Maiden and Judas Priest. Once again, Graveyard Classics IV is the same old tired formula of Six Feet Under doing things their way. Perhaps they should get part marks on my final score sheet for “getting in there and giving it a red hot go” or “just turning up”... y’know how it is these days, right? Just for turning up, you receive some kind of default token for just participating. But in all honesty, apart from the fact that Barnes’ monotonous bark kills any hope of these classics sounding remotely decent or listenable, the bigger problem is how pronounced his performance is within the mix. It’s nothing short of overpowering and too much to bear. As if it wasn’t bad enough to begin with, it’s now way too much of a really bad thing.

Musically, when you can hear the rest of the band, they are on point. Performance wise, everything is tight and played note perfect. There’s nothing new here at all. In fact, the performance is so robot-like, it’s almost too perfect to comment on. Apart from being significantly downtuned and the appallingly boring vocals from Barnes, there’s nothing of much interest here at all.

To be fair, apart from points for just turning up, the only other part marks I can give here is for the song choices. It would have been very easy to pick the predictable songs from both Priest and Maiden. Let’s face it - I’m sure we could all name plenty from both legendary acts that would fill that list quite quickly. Six Feet Under on the other hand have opted for a collection of cuts that aren’t obvious choices. Barnes and co. have handpicked the likes of Judas Priest’s “Night Crawler”, “Genocide” and “Invader” as well as Iron Maiden’s “Prowler”, “Stranger in a Strange Land” and “The Evil That Men Do”. There are five Priest tracks and six Maiden tracks making up round four of this series from this Flordian death metal group.

Taking all that into consideration, and having been subjected to this album for review, I honestly cannot find any redeeming factors here that justify the existence of this album at all. Sure Six Feet Under are doing these as a homage to their influences or heroes or whatever you want to call it, and I’ve also little doubt that they are doing it for fun. It just doesn’t sound fun at all. It just sounds, well, shit, to be blunt. Maybe diehard Six Feet Under fans will get something from this, but no one else will.

More from Six Feet Under