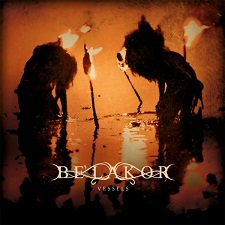 This is one band that has truly improved with every release they’ve put out there, and with Vessels, these Melbourne boys have put themselves fairly and squarely on the world class map.

Vessels is an apt name for this record. Experiencing it is like you are aboard one of the Tall Ships, venturing out across alternately stormy and placid seas on a voyage of pure discovery. The album takes you to previously unknown musical territory, territory limited only by the unfathomable imaginations and creativity of the highly accomplished musicians and songwriters that inhabit this band.

And they cast restraint to the wind and let it all hang out on this album. They have gone completely overboard with that creativity here, and as a result, the sheer amount of tones, feels, colours and vibes they have crammed onto this record, within the framework of a progressive and melodic death metal sound, is quite stunning.

I have always loved dynamics in heavy music, and this band, like their major influence Opeth whom they channel on occasion, seriously know the ropes as far as this is concerned. They know exactly when and where to pull back to a solo acoustic guitar or a quiet, introspective, or ambient moment. This is always simply the calm before the storm however, as this band know exactly how to bring the bedlam and deliver a heavy broadside of metal as well.

I’m not going to single out any songs from the eight tracks on offer here. Suffice it is to say that every tune is an epic slab of titanic progressive death metal, every song is compelling in its own right, every track brings something new to the galley table.

If you’re still holding out as one of those people who believe that Aussie metal isn’t up there with the best of what comes out of America, Europe, and the rest of the world, a few listens to Vessels should finally bring you around. This album is as good, as interesting, as compelling as just about anything you’ll hear coming from any distant shore today.

So don’t give this album a wide berth, try a different tack and check it out. It will definitely float your boat.