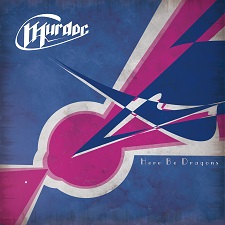 There were two things that drew me to this promo from the outset. The first is that the band’s unusual moniker reminded me of the kind of name a character from a Raymond Chandler novel might have, and the second was that the band was formed out of the ashes of Mörk Gryning and features four ex-members of that band.

A black metal act like Mörk Gryning C.B. Murdoc are not, however, with a style that sits comfortably between technical death metal and groove-oriented metal with some tinges of progressive and djent thrown in for good measure. And while none of those attributes are necessarily all that exciting to me generally, what brings it all together is the overriding feeling that things are always just a stone’s throw away from slipping into the kind of unhinged madness that a band like Nomicon used with aplomb on their incredible and very off-the-wall 1997 album, Yellow. Here be Dragons - C.B. Murdoc’s second full-length - may not fly quite as close to the sun as Yellow did, but it still manages to capture the feeling that the band are harnessing a kind of musical chaos.

What really appeals to me about Here be Dragons is that it’s one of those rare technical death metal albums where the technicality almost appears to be tangential to the exercise rather than it being the primary focus of it. In other words, unlike so many of the bands that occupy this space in the death metal spectrum, C.B. Murdoc write songs and riffs that just happen to have a technical quality to them, as opposed to writing technical music that may or may not also result in a good song or riff, the overwhelming prevalence of which has practically turned me off the genre altogether. There is no sense of obnoxiousness here at all and that’s a massive breath of fresh air for me.

Central to Here be Dragons’ ability to hold my interest is its sense of pacing and its willingness to change things up at a moment’s notice. Sure, the vast bulk of the album is played at a relatively fast pace, but the band makes plenty of room for slower and more melodic moments in a fashion perhaps not too dissimilar to those employed by Gorod. The importance of these change-ups cannot be overstated, either, because had the album been solely comprised of dense and complex material, it would’ve completed washed over me within a few songs.

Even with all of its positive qualities, though, at over 50-minutes in length, Here be Dragons probably does overstay its welcome by about 10-minutes or so and starts to drag a bit in its second half with tracks such as “Dither”, “Diamonds”, and “11” not really doing all that much for me and being pretty good candidates for being left out entirely, in my opinion. But, with that being said, late-album bangers like “Everything is Going to be OK” and “Objecting Projection” are two of the best tracks on the album and go a long way towards undoing some of the sense of drag that the tracks around them bring about.

It’s always great when you throw yourself into an album with no idea of what you’re going to get and find that it really tickles your fancy, and Here be Dragons was definitely one of those albums for me. When the compositional skill and high level of musicianship of C.B. Murdoc is taken into consideration, it’s borderline criminal that these guys don’t have a higher profile than they do because they are more than deserving of your attention.