Mark of the Blade 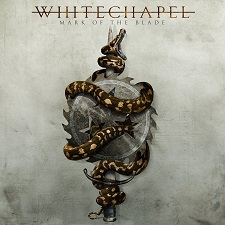 Knoxville, Tennessee sextet, Whitechapel, have just unleashed what is no doubt going to be one of the biggest cans of worms of not only their career but of 2016 with their sixth record, Mark of the Blade. It’s 2014, Billboard 200 top 10 cracking predecessor, Our Endless War, was by far their most diverse record, many may probably argue this is even more so, but I disagree. This is their most accessible, simply because it lacks in diversity. Our Endless War was chock full of peaks and valleys, creative song structures, blistering speed, ferocious aggression, and grooves. Their latest offering starts from the highest peak with “The Void”, the only fast song with a few seconds of blast beats and just plateaus from there into a sea of heavy, groove-laden tracks.

The band has made it very clear they don’t care what anyone else thinks - which I respect - and “Elitist Ones” backs that statement up with two middle fingers to all doubters, haters, and moronic morals when it comes to metal; it's a solid track. There are some quite surprising moments with the soft and slow (I won’t say ballad) structure of “Bring Me Home” where vocalist Phil Bozeman opens up about the death of his father when he was 10 years old and incorporates the use of clean vocals that bring to mind Corey Taylor. It's not a bad song actually, but I'm pretty sure I heard a bunch of dudes from Iowa do something very similar and that thought is confirmed with the angst of “A Killing Industry”.

While Whitechapel aren’t exactly known for ripping up the fret boards, there is some nice lead work across these tunes, as there was on Our Endless War but those were all performed by musicians not in the band so I am not sure who out of their three pronged attack belted these ones out either. Surprise instrumental “Brotherhood” is a really solid and tight jam that is very reminiscent of the kind of instrumentals Chimaira was so good at executing.

But, herein lays the problem. I've referenced others bands and musicians that I never would have if I were reviewing both Whitechapel’s excellent A New Era of Corruption and Our Endless War because I've never had other bands enter my conscience while listening to those much loved records. Sure, they've never been entirely unique or original, but who is? I guess the more and more I've listened to Mark of the Blade, the more disappointed I've become. It is still identifiable as Whitechapel, Phil’s guttural but intelligible lows are still ever present but I miss the absence of his well-placed high register screams and of course the speed and blasting.

I'm all for experimenting and broadening horizons but with Phil’s statement of "The theme of 'Mark of the Blade' is a celebration of Whitechapel being together for ten years and the fans that support us no matter what” we shall soon see. I am concerned these lads may have travelled too far off the left hand path and carried on down the yellow brick road that far too many bands stumble upon and say fuck it, let's see where this takes us. Unfortunately, it's not a place I ever wanted Whitechapel to go, let alone find myself.