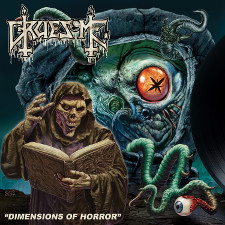 With Relapse records wrapping up their series of deluxe “everything including the kitchen sink” multi-CD and LP Death reissues this month, it seems only fitting that Gruesome also return with a new EP to boot. Titled Dimensions of Horror, this six tracker feels like it’s there to keep the band’s name out there in a timely manner given just how rooted Gruesome are in all things Death. For those who have no idea what I’m talking about, quite simply Gruesome today are where Chuck Schuldiner and Death were almost three decades ago.

Now that might sound a little unfair but after a single listen to Gruesome’s awesome debut long player from last year titled Savage Land, the band’s modus operandi is crystal clear. It was flawless Leprosy worship which will always sit nicely with this reviewer. Whilst not being a total rip off, the tip of the hat in the direction of that particular Death album was undeniable. Its purpose and direction were clear and corresponding execution was bang on.

I’m a little surprised by the release of a six track EP so quickly after Savage Land. I’m not sure if it’s a timing thing or totally unrelated to the final Death reissue. Maybe it doesn’t even matter. Either way, Dimensions of Horror popped up on my radar and I was quite keen to see what the quartet have to offer this time.

Six tracks, sub twenty minutes. There’s no doubt this EP has those two items working in its favour. The songs are concise and to the point and continue in that early Death vein. If anything, perhaps this handful of tracks throw back to the likes of the classic Scream Bloody Gore album more so than anything post 1988. Sure there’s a hint of Leprosy to them but for the most part, Dimensions of Horror feels more like 1987 than 1988.

What also matches that era is the production of this EP. Dimensions of Horror completely lacks the polished guitar tones and clear yet guttural vocals that gave Savage Land that added to the Leprosy-like flavour. The guitars are muddier and the vocals slightly less audible (if that’s even possible on a death metal record) and grittier than the previous effort. It certainly cements this release in an earlier era than Gruesome’s debut.

Dimensions in Horror is nice enough and fills a void, I guess. I’m not 100% convinced on the need for it so quickly after their excellent debut. If you are a fan of early Death and you dig what Gruesome delivered less than a year ago, then there’s no doubt this is for you too.