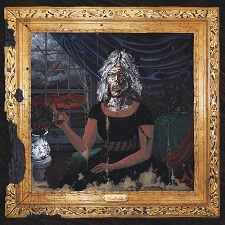 While I’m a lover of books, I’ve never really gotten on board with the audiobook format. There’s something about the experience of digesting a story through the written word that isn’t quite the same for me when it’s being narrated back. With that being said, though, this particular audiobook intrigued me not so much because of the book itself (though that was definitely part of it) but because the soundtrack is provided by challenging industrial band, Theologian - an act I’m not intimately familiar with but have enjoyed from my limited experience.

This particular release of The Lurking Fear comes via Cadabra Records which, like their release of The Hound earlier this year, is narrated by Andrew Leman (a founding member of the H.P. Lovecraft Historical Society) whose narration, as mentioned, is accompanied by Theologian. It is a very limited release, however, with only 500 LPs being pressed and only 300 of those going up for sale.

Lovecraft's 8000-odd word tale is divided across two 25-minute (ish) sides (tracks) and the interplay between Leman’s passionate narration and the creepy though rather sparse Theologian soundtrack is wonderful. Leman’s sense of pacing is extremely strong and works to greatly emphasise the growing sense of dread as the protagonist recounts his tale to us. Lovecraft was particularly adjective-heavy in this story and wasn't shy about utilising more challenging aspects of the English language to convey his ideas, so that Leman can enunciate his way through them with seeming ease is impressive indeed.

If I had a single complaint, it wouldn't be a particularly fair one considering the kind of material at hand, but I would have liked Theologian’s role to have been a tad more pronounced - especially considering it was their participation that piqued my interest in the first place. What space they're afforded reflects and enhances the material contextually (and this is why I realise it's silly to be effectively lamenting that I didn't get a Theologian album as well as an audiobook), but I guess I just wasn't expecting their contribution to be so subtle and restrained.

There isn't much else I can say about this release of The Lurking Fear without repeating myself, but what I will say in closing is if you're a fan of Lovecraft or would like to be one, then Cadabra Records have put together a very worthy package here that would be a great introduction or complement to your collection. If you can track it down in its limited run, of course.