Victim to the Blade 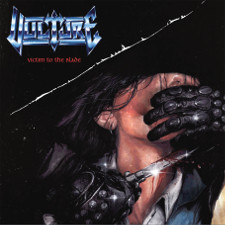 Speed metal is one of those genres that sit in between two other major genres. For example, deathcore sits smack bang in the middle of death metal and hardcore. Speed metal to me sits in the middle of thrash metal and traditional metal. Whilst there are a myriad of bands that sit in those two major genres, there’s not a lot these days that take up residence within the realm of speed metal. Founded in 2015, this German quartet is offering up this EP of three original tracks and a cover as a teaser of what is to come.

If this short, sharp release is anything to go by, then Vulture is setting themselves up for something that will certainly appeal to fans of the genre. There’s no doubt that they are channelling influences from Paul Baloff era Exodus, Don Doty era Dark Angel, early Anthrax and Slayer, Agent Steel and Razor. I’m sure if any number of those eras and groups float your boat then you should give Vulture a few minutes of your time.

The three original tracks deliver everything speed freaks want - frantic riffs and wailing vocals all at a blistering pace. It just has 2016 production instead of sounding like the speed metal that many of us grew up with and hold dear to our hearts. There’s plenty of blinding leads in here as well and at times all of the original cuts feel closer to thrash than traditional metal, but that doesn’t affect the overall appeal of the EP at all. The synth based intro of “D.T.D. (Delivered to Die)” is a little unexpected however and tends to go on for a little too long. Sure it builds to decent enough song once it gets going but it does feel a little weird on a speed metal album. That particular intro is the only real blemish on here. The album is wrapped up with a furious cover of Priest’s “Rapid Fire”. They’ve picked up the pace on this classic Priest track playing it almost a full minute faster than the original and it sounds great too. In fact, this pace works really well with this killer cut.

Speed metal won’t be for everyone in this day and age but for those of you out there that still love the old style of metal, then you need to hear Vulture’s debut effort. Vulture is off to a flying start (see what I did there?). If this is anything to go by, then their debut long player should kick arse!