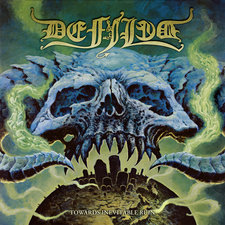 The Japanese death metal juggernaut that is Defiled has been crushing skulls and taking names for 22 brutal years. Much like their home city of Tokyo, this is metal of monstrous proportions. In the five years since Defiled’s last full-length album, In Crisis, a cauldron of heavy metal goodness has been brewing. Grub’s up in 2016 as Towards Inevitable Ruin is served – in your face!

Do not attempt to digest these twelve tracks in one sitting. The sheer crustiness and pulverising rawness needs to be gnawed on and savoured. You need to work your way through the layers of meat and sinew to reach the marrow – the core at which you will better absorb the pure gruesomeness. Mastermind Yusuke Sumita (guitar) is accompanied by Shinichiro Hamada (vocals, guitar), Hiroaki Sato (bass) and Keisuke Hamada (drums) to create an album mashing together elements of crust punk, tech-death and old school groove-laden death metal.

First impressions of Towards Inevitable Ruin are dominated by the lo-fi production. Riffs trapped inside a steel refuse bin, shuddering tin roof drum blasts and animalistic vocal ruptures all come together in devastating fashion. The more you listen, the more the nuances begin to reveal themselves. It’s almost like while Keisuke and Hiroaki lay down the ground fire, mowing everything down in their path, the guitar duo of Yusuke and Shinichiro is conducting the orchestrated and hostile takeover. The intricacies lie embedded within the shards of groove scattered throughout waves of catchy riffs. Smooth shifts in tempo dominate the album, serving as the strings of flesh holding this wrecking ball of bones and guts together.

“Subversion” opens with determination; somewhat like a marching beat into battle. Calculated carnage ensues with many a highlight along the way. It’s important to stress again that this is not an album to be given a cursory onceover. Amidst all the punishment is an equally impressive degree of diversity. Speed is balanced by groove; heaviness by catchy tempo and the sheer organic rawness by tightly executed musicianship. Sumita is very much at the centre of it all; directing every shift and turn. He shreds, churns out an array of riffs and cuts across time signatures with ease.

With so much to enjoy and get stuck into with Towards Inevitable Ruin, it’s simply one of those albums that will frighten the shit out of many metal fans. We all have our niches in heavy metal – bands, sounds and genres we stick to – but, the appreciation factor with Defiled here is undeniable. This is pure evil mixed in with a whole of energy, creativity and originality.