Great is Our Sin 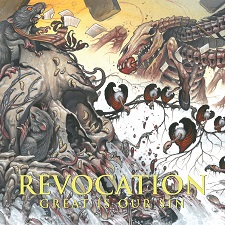 When I think of Boston, Massachusetts, I think of hardcore and metalcore bands, plenty of them and some rather excellent ones I might add. I most certainly don't think of technical death and thrash metal, that's for sure. That all changed barely three years ago when I stumbled upon the self-titled and fourth long player by Revocation. A year later, they delivered one of my top 10 releases of 2014 with Deathless, also marking their debut for Metal Blade Records.

Not even two years later, and vocalist/guitarist David Davidson and his killer cronies are back with their sixth record, Great is Our Sin. These guys are even more prolific than label mates The Black Dahlia Murder and their consistent output. Since 2008, they’ve delivered six full lengths and an EP with no signs of slowing down or finding the bottom of that well of glorious riffs that Davidson seems to pull from time and again. The man is a true songwriter and composer and “Arbiters of the Apocalypse” immediately mows you down in a flurry of cascading riffs, blast beats, melodies, and intricate components that make the mind boggle.

There is a noticeable increase in vocal variation and style employed by Davidson across Great is Our Sin, with several melodically tinged clean vocal sections that bring to mind the lads from Intronaut. Just listen to the aforementioned opener, “Monolithic Ignorance”, or the truly fantastic “Profanum Vulgus”. However, everything is perfectly balanced out as Davidson also condemns the listener with a truly blistering and brutal performance.

Replacing original skins man Phil Dubois-Coyne is Ash Pearson, formerly of Canadian metallers 3 inches of blood, and Ash showcases a skillset of technical prowess and creativity that I don’t recall hearing in his previous outfit. A Revocation album is not complete without an instrumental and former Megadeth shredder Marty Friedman makes a guest guitar solo appearance on “The Exaltation”. Finally, let’s not forget what has become standard Revocation fare to tackle a legendary cover; a face melting rendition of the Slayer classic “Altar of Sacrifice”, delivered as if they wrote it themselves.

I must admit, there are no standouts in the vein of such faultless cuts from Deathless as “A Debt Owed to the Grave”, “Madness Opus”, or “Witch Trials”. There are not as many memorable songs, melodies, or hooks as this feels a lot more technical, complex ,and death metal focussed and essentially heavier than previous efforts, which is still pretty bloody OK with me.

It can be quite a struggle at times to define the sound of Revocation as there is a constant blend of early '90s inspired metal, thrash metal, and technical death metal interspersed with gorgeous guitar solos and progressive moments like the back half of “Crumbling Imperium”. However, continually and successfully blending a fusion of all of the above and more is a triumph and they simply just keep you coming back for more. There are not many modern bands out there of this calibre.