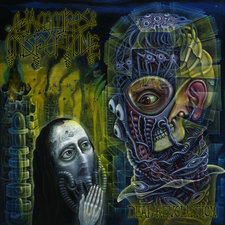 There are those bands and styles of metal that ooze that sense of ‘epic’, taking the listener on a journey of riffs, melody, hooks, guitar solos, and dramatic vocals all tied to a string of stories or overall theme. Hammers of Misfortune and their brand of progressive, ‘70s-influenced metal fall into this category. The six member-strong San Francisco outfit has taken its time in releasing this, their sixth full-length studio album, but understandably so when considering everything that’s gone on behind the scenes both personally and professionally with certain band members’ side projects. Dead Revolution comes off the back of all of this and 2011’s well-received 17th Street.

At nearly 13-minutes in, a mouth-watering riff welcomes “Sea of Heroes” to the fold and it is here that the album finally feels like it’s taking shape. This is not to say that “The Velvet Inquisition” and the title track aren’t any good, but rather that “Sea of Heroes” is streets ahead. There is wonderful groove and feeling to the song with that central, rock-embroidered riff flirting with a beguiling rhythm partner and varied tones of melody and mood. And if you are enjoying the album up to this point, what follows certainly does a lot to seduce you further.

“The Precipice (Waiting for the Crash)” is the album’s stellar moment. There is brilliant synergy between central songwriter John Cobbett and Leila Abdul-Rauf on guitar with riff upon riff coated with tastefully tailored lead sections. There is not one dull moment amidst these eight minutes – with wonderful lulls in tempo filled with atmospheric organ courtesy of Sigrid Sheie; a brilliant and very memorable single chorus in the middle and just generally, the band putting on a display of impressive creativity and originality.

The energy up to this point recedes somewhat with “Here Comes the Sky”. There is more of a doom metal and emotive vibe coming to the fore here, but it has a hum and organic tone to it that’s quite powerful. “Flying Alone” is quite a catchy track; really rocking out and digging its heels in with the spotlight falling a bit more on drummer Will Carroll. The album closes with a cover of “Days of ‘49” – a slightly embellished and drawn-out version.

Dead Revolution sounds lively and full despite the band doing very little to the end product in the recording studio. Nick Dumitriu has done a good job at engineering a sound that captures both the band’s affiliation with organic 1970s rock and a progressive metal element. Ultimately, with the quality of “Sea of Heroes” and “The Precipice” in relation to the other six tracks, it feels somewhat like biting into a sandwich with an awesome filling but between day-old bread. “The Precipice” is still one of the coolest songs I have heard this year though.

More from Hammers of Misfortune