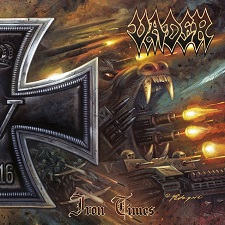 I’d be amazed if anyone went into a new Vader recording expecting to be surprised by what they hear by this point. Aside from the fact that the band has been active for over 25 years, their output has also been incredibly consistent over that period, both in its quality and in its exploration of a death metal meets thrash sound.

They’re a highly dependable act, to be sure, and the only question that I ever have surrounding a new recording from them is whether or not the way they arrange their trusty musical building blocks will result in an album that’s on par with my favourites or is still really good but not quite on par with them. In the case of Iron TImes, a stopgap release before the band’s new album, The Empire, drops in November, the result is definitely one of the former.

Featuring two new songs from the band’s forthcoming album, a Panzer X cover (“Pięść I Stal”), and a Motörhead cover (“Overkill”), Iron Times is a short, sub-14-minute listen but, man, does it pack a lot of fun into its short running time with its favouring of upbeat thrash over death metal.

Both of the original tracks (“Parabellum” and “Prayer to the God of War”) fly by with just over five minutes of running time between them, but they're classic Vader, and not just that - they're Vader at the top of their game. Each track is a masterclass in thrashy death metal featuring all of the components you'd want to hear from the band - furious riffing, blasting drumming, scorching solos, and the ever reliable and recognisable vocals of Piotr Wiwczarek. What's not to love?

The two cover songs (“Pięść I Stal” and “Overkill”) were both new to me (yes, I'll turn in my metal card) but they complement the two originals perfectly with the former almost able to pass as a Vader original and the latter sounding exactly like what you'd imagine a merging of Vader and Motörhead would sound like. There's a hell of a lot of head nodding fun to be had here.

As I said at the beginning of this review, you aren't going to find any surprises on Iron Times. What you will find, however, is the veteran band at the top of their game and seemingly having a banger of a time about it. If the intention was to whet appetites ahead of The Empire in November, I'd consider the mission to be a resounding success.