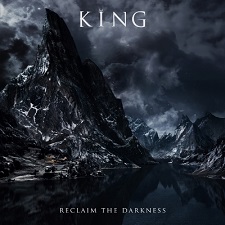 Over a writing and recording period of two years, the result has culminated in the form of their debut record, Reclaim the Darkness. Influences ranging from Immortal, Satyrico,n and Dissection are clearly evident as are the brief injections of early Opeth acoustic moments and early Iron Maiden guitar harmonies sprinkled throughout the nine songs across Reclaim the Darkness such as the title track and “Black North”.

The likes of “Night Sky Abyss” and “Winter Sons” combine the sounds of more classic and traditional black metal elements with enough modern edges and grooves to add just enough to remind you that King is a new band, doing enough to not sound like a carbon copy. The latter of which being the fastest song on Reclaim the Darkness containing some brutal blast beats backing the choruses amongst many killer drum fills and patterns from David Haley and guitar melodies from David Hill.

Tony Forde provides a surprisingly authentic, throat-shredding black metal performance on the vocals, all the while allowing the listener to easily pick up on many of the lyrics. In all honesty, I would never have known it was him without reading the press release and towards the end of “The Journey Begins” you swear a young Ihsahn, formerly of black metal legends Emperor, has taken control of the microphone, followed up by some very nice Maiden inspired harmonies.

While there is a heavy early black metal influence, any moments of speed and blasting are few and far between as clearly speed is not the point here. The overall general vibe is of a more mid-paced, stormy northern winter sounding metal that is complimented by some stunning album art that appropriately matches the chilly sounds contained within recorded and engineered by Joseph Haley, David Haley’s brother and guitarist for Psycroptic.

Not a bad accomplishment from a band that is almost as far removed as one could be from all things Nordic, but successfully capturing that blackened essence of not only the early '90s black metal scene but influencing and allowing ones imagination to run wild, dreaming of an unknown ancient warriors journey, long since forgotten.