Charred Walls of the Damned

Creatures Watching Over the Dead 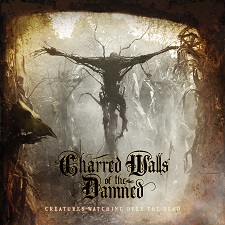 After an excellent two album cycle with heavy metal masters Iced Earth, drummer Richard Christy virtually disappeared from the music scene for over five years, taking up a seat as a radio presenter on The Howard Stern Show. In 2010, he returned with an all-star line-up and a self-titled debut metal record under the moniker of Charred Walls of the Damned. There is a rather amusing back story to the origins of the band’s name, as a result of prank calls from his time on radio which you can easily find online

This supergroup consisted of powerhouse vocalist Tim “Ripper” Owens (Judas Priest, Iced Earth), bassist Steve DiGiorgio (Testament, Death, Soen, Iced Earth, the list goes on), and guitarist/producer Jason Suecof of Audiohammer Studios whom I’m sure you’re all familiar with. This was a band that I should have loved immediately as the line-up just oozes cross generations of metal, but for some reason that debut just did not register and I don’t even recall getting around to bothering with their sophomore effort, 2011’s Cold Winds on Times Days.

Quite a lot of time has again passed since we last heard from the band, but continuing with the trend of an album title consisting of five words with the first letter of each reflecting those of the band’s name, they’re back with record number three, Creatures Watching Over the Dead. I can happily state that this one is quite the surprising little ball tearer as opener “My Eyes” immediately sinks its hooks into you and Ripper comes screaming like a banshee over the top of thick, bludgeoning grooves. This is swiftly followed up by the intense and blast beat infused thrasher “The Soulless”.

Ripper’s vocals have not changed over the years, sounding as powerful as ever with some fantastic screams that start quite low but ending in that window shattering high pitched howl he is so well known for. Whether it’s those heavy layered vocal choruses sounding as if one hundred Ripper’s are singing in unison or his mimicry of Painkiller era Rob Halford on “Reach Into the Light”. Jason Suecof rips and shreds, proving he has the chops as a musician not just a producer and “Tear Me Down” even features a guest guitar solo by Rob Cavestany of Death Angel.

Richard’s technical proficiency and prowess as a drummer has always been something I have very much enjoyed, especially his past work on Iced Earth’s Horror Show and Death’s The Sound of Perseverance. This record is another prime example of his skill, but not just as a drummer but a songwriter as he writes the majority of the guitar music before Jason takes it by the horns. That ridiculous fretless bass work of Steve DiGiorgio is always aurally awesome as he runs all over the neck like on closer “Time Has Passed”.

Another song or two in the similar pace of “The Soulless” would have been nice and at nine songs in barely 33 minutes it is quite a short record. But, thanks to the quality of the actual songs and musicianship on display, it easily warrants some heavy replay value. Whether or not that could be its downfall overtime being a fast burner I’m not sure, but I’ll continue to enjoy the hell out of this while it lasts.

More from Charred Walls of the Damned