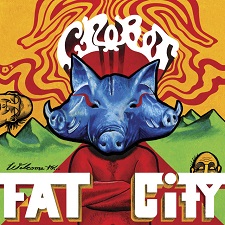 I have mentioned in the past that Nuclear Blast have built up an impressive roster in recent years, branching out to consist of some pretty killer hard rock n roll bands in addition to the high calibre death and thrash metal that is synonymous with the label. Some of these bands are definitely better than others of course, as many are just belting out a sound that has already been done to death or come across as just plain boring. Pottsville, Pennsylvania’s Crobot are the latest hard rock addition to that roster with the rather amusing title of their sophomore effort and debut for Nuclear Blast, Welcome to Fat City.

Crobot are still a relatively young band, having only formed in 2011 with two EPs and their Wind-Up records debut Something Supernatural under their collective belts. I know I have listened to that record at some point, but I honestly can’t recall much about it. So with that said, I dived into Welcome to Fat City with a fresh set of ears and a fresh opinion waiting to be formed.

The opening title track kicks in with a riff bringing to mind something Audioslave would have used as an opener or as one of their ear-grabbing singles. In fact, I sense a rather decent dose of inspiration from Tom Morello across Welcome to Fat City. That’s not to imply that Crobot are a carbon copy, because they don’t really sound anything like Audioslave or Rage Against the Machine for that matter, but some of those riffs and even the guitar tone definitely warrant such comparisons, if only for a point of reference for new listeners.

The main point of focus here I think is the vocals of front man Brandon Yeagley who also contributes a mean harmonica solo here and there. At times, he reminds me of a cross between Myles Kennedy (Alter Bridge, Slash), Chris Cornell (Soundgarden, Audioslave), and Sebastian Bach (Skid Row) in his prime. See the chorus of “Play it Cool” which in my opinion is no bad thing. The man has a set of pipes and he works them, hard. Sure his style is won’t be for everybody but I sure am partial to a great, powerful rock n roll voice from time to time.

The tight rhythm section of brothers Paul and Jake Figueroa on drums and bass respectively lock in behind guitarist Chris Bishop as he effortlessly belts out rock n roll riff after riff, solo after solo. Crobot aren’t breaking any new ground, but they aren’t trying to. This is good solid party music that you can drink to, play some pool and do your own impressions of Brandon’s powerhouse vocals while holding tight onto your cue like it’s a microphone stand with one hand, the other one horn in the air.