The Violent Sleep of Reason 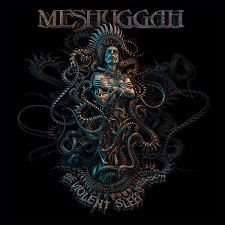 I don’t know about you, but in the late 90s an obscure band from Umeå, Sweden by the name of Meshuggah took every single thing I thought I knew about metal, rolled it up into a ball of garbage and through it out the window. They left my mouth gaping wide open, my ears ringing and my mind wandering in the wilderness for days, wondering what in Jesus H. Christ I had just been put through. I am of course referring to their 1998 all-important third record and aptly titled, Chaosphere.

Since then, I don’t think the band has ever lived up to the content of that record. I’m not going to sit here and rave on about 1995’s Destroy. Erase. Improve. Yes, we all know how killer it is, but Chaosphere redefined everything and resulted in a unique and original sound that is truly theirs and still prevails today. Out of the four succeeding records, only 2008’s obZen came close to possibly rivalling its mind blowing complexity, brutality, and visceral excellence. Meshuggah’s last record, 2012’s Koloss felt a tad uninspired, lacklustre, and quite frankly, boring. Not to mention a lack of aggression from vocalist Jens Kidman.

Enter The Violent Sleep of Reason. Not only Meshuggah’s eighth record but their eighth with long time label, Nuclear Blast Records. The sheer insanity that is seven minute opener “Clockworks” and its barrage of catatonic, percussive hellfire from drummer and chief lyricist Tomas Haake, off kilter palm muted polyrhythmic riffs and scales as venomous vocal angst from Jens pierces through is enough to make the mind implode as your internal monologue asks you, what is going on? I’m sure I do not know, but I like it. This is the most Chaosphere sounding song I have heard from Meshuggah since well, Chaosphere.

This is however most definitely not an attempt at repeating that record, but perhaps recapturing the essence of it. The band, rounded out by original guitarist Fredrik Thordendal, long time guitarist Mårten Hagström, and since 2004, bassist Dick Lövgren opted to record The Violent Sleep of Reason live with Danish producer Tue Madsen (The Haunted) at Puk Studios in Denmark; and honestly, it shows. This is a much less polished record than several of its predecessors, containing a much more human and not so perfect feel to it.

The eerie and haunting outro of “Stifled” blends into what has got to be one of the most crushing and sickeningly heavy compositions in Meshuggah’s discography, “Nostrum”. The guitars on this beast are bludgeoning and the percussion is inhumanely insane. At 58 minutes and 10 tracks, The Violent Sleep of Reason is possibly a tad long and the last two songs honestly do not live up to the content that preceded it. But this is without a doubt the best record Meshuggah have unleashed in almost 20 years and I for one have longed for the band to produce another batch of chaotic but enjoyable aural pleasures such as this.