Concepts of Math: Book One 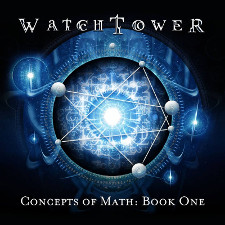 Watchtower is a band that I discovered waaaaaaay back in the day when Rage playing metal clips of any description was a rarity. It wasn’t a monthly thing or anything like that. It was a once in a blue moon thing and there was no internet or playlists posted up in advance so you knew what was coming up. You just took a shot in the dark (pardon the Ozzy pun) and set your VCR to record some random 3 or 4 hour segment and hope to hell that there would be one or maybe two metal clips. On super rare occasions they would play a 30 minute segment of just metal clips or maybe a mix and match fucked up combo of metal/punk/alternative and clips. Either way, it was as rare as hen’s teeth, no doubt. Anyways, this one particular night one of the clips they showed alongside Faith No More, Space Juniors and Radio Birdman was “The Eldritch” by Watchtower. I might have been well and truly entrenched in all things thrash and death metal at this point, but Watchtower stood out.

“The Eldritch” was the single lifted from the 1989 album Control and Resistance which was considered one of the greatest technical thrash albums of the ‘80’s according to Guitar World magazine. It would prove to be the band’s last long player as they disbanded soon after in 1990 due to the departure of vocalist Alan Tecchio and various hand problems and multiple surgeries that guitar wiz Ron Jarzombek endured. The band very sporadically reformed to varying degrees and played a small handful of shows during between 1999 and 2010 but nothing came to fruition. The album was reissued by Divebomb Records a few years back.

The band has on and off recorded single tracks starting with 2010’s “The Size of Matter”. With vocalist Tecchio seemingly on and off again with Watchtower, nothing more than a small number of singles saw the light day here via what could only be likened to a drip feed release pattern. Prosthetic Records have put all of these four previous tracks together with a new track, “Mathematics Calculis” for release on the bands first studio effort in 27 years, titled Concepts of Math: Book One.

Everything feels right about this release. Watchtower fans will no doubt hate the fact that it’s taken five or so years to put together some kind of release given the haphazard release of these tracks over the years. But for me, something is better than nothing. I just hope the band can get it together and sort whatever the issue is with Tecchio to finally give fans a worthy full length follow up to Control and Resistance. It’s long overdue for sure and going by this teaser, it could very well be worth the wait. If nothing else, at least we have this release for the moment. It’ll keep the wolves at bay for a little while longer.