Brotherhood of the Snake 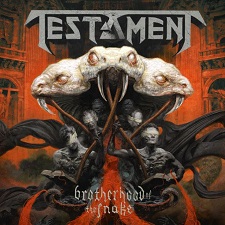 While 2008’s The Formation of Damnation and 2012’s Dark Roots of Earth were both excellent Testament records post-reunion, brimming with thrash, melody, and hooks, there was a substantial overall lack of speed. This is far from a major issue, but something I personally love as a side dish with my Testament meal. A couple of faster songs could have pushed them just that little bit further to rival that of earlier glories or their 1999 beast of a release, The Gathering. Well fret not, because Testament’s original axeman and chief song writer since the band's inception in 1983, Mr. Eric Petersen, has achieved exactly that.

Brotherhood of the Snake is Testament’s 11th studio album and obliterates all in its path as it opens with the blistering title track, containing the fastest blast beat that drummer Gene “The Atomic Clock” Hoglan has ever recorded, not just with Testament but for any band. Fast paced numbers like “Stronghold” are begging for crowd participation in the chorus and “Centuries of Suffering” will well and truly induce circle pit madness. Chuck Billy’s vocals have aged extremely well and that guttural low end death growl of his is back in fine form and used at exactly the right moments.

The riff fest that is pouring out of guitarist Eric Peterson’s right hand is extraordinary and the man just oozes metal as does the killer and audible fretless bass work of Steve DiGiorgio who makes his recorded return to the band since last appearing on The Gathering. The highlight however is the shredding and ridiculous solo work of Alex Skolnick as the man is off the chain. Just listen to his melodic Iron Maiden-esque soulful leads on “Seven Seals” as there are ample to choose from on this song alone.

A total of six out of the ten rip snorting anthems here are full blown thrash metal barn burners. The closing trio of “Black Jack” and its lyrics depicting the trappings of gambling addiction and some kick arse snare work from Gene in the chorus, “Canna Business” and its creative title and lyrics regarding the legalisation and use of medicinal marijuana in the United States, and “The Number Game” are all thrashing mad. Each pushes the accelerator to outdo the previous, one after the other.

Brotherhood of the Snake was a very difficult record for Testament to make due to quite an unexpected and extended writing and recording period with various members' hectic and conflicting schedules in other bands, projects, and even their residencies. However Testament has not sounded this tight, fast, and vicious since The Gathering. Sure, there are only two records in between that and this, but 17 years has passed in that time period and these fellas are playing with the levels of piss and vinegar found in a bunch of 19 year olds as if they were inventing thrash metal all over again.