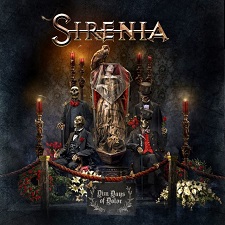 I came into Sirenia’s eighth full length album, Dim Days of Dolor, consciously aware that I’m not really its target audience. This is a band that once straddled a line between symphonic metal and melodic death metal but has steadily steered itself towards the former at the expense of the latter (hence me not falling within the sphere of its intended audience). That said, I actually rather enjoyed the band’s 2007 album, Nine Destinies and a Downfall, so I’ve kept an eye on them over the intervening years and have suffered through an awful lot of average albums as a result, but with the announcement of new operatic vocalist Emmanuelle Zoldan, I was curious to hear just what Sirenia could conjure up with some fresh blood in the mix.

Perhaps unsurprisingly, what they’ve conjured up is pretty much exactly what you’d expect from a modern symphonic metal album, despite the defining quality of the very impressive vocal performance from Zoldan. This isn’t to say that it’s a bad release at all, but rather that no risks have been taken, no boundaries have been pushed, and no surprises are hidden away waiting to be uncovered, which puts it squarely into highly listenable but not overly memorable territory.

There is an undeniably fun quality to Dim Days of Dolor, though, and it’s the upbeat, often sickly sweet pop sensibility that gives the album its playability, so it’s a shame that there’s so little depth to the album when you scratch its surface. It’s the very definition of a well-played and well-arranged release that seems to have everything going for it except for one of the most critically important musical qualities: a sense that there’s some real heart at the core of what’s been presented. I certainly recognise that a lot of effort has gone into Dim Days of Dolor’s construction, but I also can’t help but feel that so much of it gives off the air of a band that is simply going through the motions; a band that is playing it way too safe. There's nothing in amongst the frequently catchy and generally inoffensive melodies that resonates at a deeper level, and this is its real Achilles heel, not its penchant for the pomp and cheese that is so entrenched in the genre. It's just not a particularly easy album to form a real emotional bond with, and that's a serious issue.

But while there's a lot about Dim Days of Dolor that doesn't work for me, I'd be remiss if I didn't compliment the high quality of the musicality that's on display. This isn't a flashy album guitar-wise, with much of the detail coming from the programmed synths, but they do take advantage of the opportunities given to them and serve their purpose in grounding things roughly within the metal realm (though, really, this is still very much on the lighter end of the spectrum). Truthfully, though, this is very much a showcase for the band's new vocalist - who really does turn in a stellar performance - and for the programming of Morten Veland which, domineering as it can sometimes be, is also top notch.

As I said at the beginning of this review, I'm fully aware that I was probably never really going to be singing the praises of Dim Days of Dolor, both because of its genre and because of my history with Sirenia. The truth is, though, that for all of the issues I have with it, it's still a very listenable album that features some great performances. It's just disappointing that all of this talent couldn't deliver us an album that at least pretends to be trying to break free of what are some very well established norms within the symphonic metal genre. Not everything needs to forge a bold new path of course, but it certainly doesn't hurt to give the impression that it was at least flirted with as an option, either.