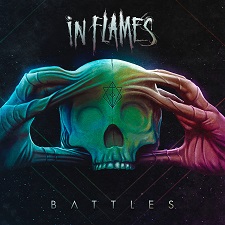 A number of years have passed since I last gave In Flames any significant attention. Even more have passed since they released an album I enjoyed, such as 2006’s Come Clarity. While that wasn’t a true return to form of their classic '90s output, it was a great effort. After a brief stint on Sony Music Entertainment, In Flames are back with Nuclear Blast, where it all not so much as began, but where all of the magic happened, resulting in some of the greatest Gothenburg melodic death metal records ever pioneered that many feel overshadow everything the band has released since, and with good reason.

So, with that said, I decided to take a leap of faith and see what they’re up to these days with their 12th record titled Battles. This marks their first output since long time drummer Daniel Svensson left in 2015, who has been replaced by Joe Rickard. Initially only a studio drummer, Joe has since become a full time member and was recommended by producer Howard Benson. While Howard himself is probably not well known in the metal world, he has worked with Motörhead and Sepultura, but has a resume that strongly reflects many bands of a much more commercial and alternative approach and I have major concerns for how this has impacted the outcome of Battles.

The chorus of album opener “Drained” is obviously written with live crowd singalongs in mind, but it is simply god awful and repetitive. Lead singles “The End” and “The Truth” again follow a similar path and the adult voices used to symbolise kids singing are just terrible. The likes of “In My Room” feels like something Incubus would have written in the early 2000s and, for a brief moment, “Through My Eyes” gets your hopes up for something a little more aggressive and heavy in nature that brings to mind a band like Demon Hunter, especially with the clean vocal driven chorus. I know I’m comparing to other bands here, but that is the problem; I don’t hear In Flames.

The voice of vocalist Anders Fridén is completely over produced and processed and, quite frankly, has been for many years. The total reconstruction of his vocal approach is something that has always puzzled and annoyed me. Since his almost scathing black metal shrieks on Dark Tranquillity’s debut Skydancer, his evil roars on The Jester Race & Whoracle, through to what I consider his peak performance on Colony, the man obviously made an attempt to broaden his range. However, those attempts are almost an exercise in futility because he is not Björn “Speed” Strid of Soilwork. Anders makes me cringe, at times coming across like an even wimpier Jonathon Davis crossed with Brian Molko.

So many aspects of Battles, from the terrible cover art, the band's current logo, the basic album title, song titles, and lyrics speak volumes about the audience they’re targeting. I don’t believe for a minute they’re writing this music for themselves and I have no doubt that if you play some early In Flames to a younger, latter day fan, they will tell you the classic stuff is garbage. It’s no wonder they’re touring as part of packaged tours with the likes of Avenged Sevenfold. I know their days of combining death metal with Iron Maiden twin guitar harmonies are long gone, and with virtually no original members left in the band I can accept that to some extent, but to completely disassociate themselves from what they helped pioneer is a tragedy.

I’m not an elitist and I’m not living in the past, because I love when a band evolves and progresses forward, but it has to be good, if not awesome. I just don’t recognise this band anymore and Battles has solidified why I stopped listening to them some years ago. When you look at their peers such as Dark Tranquillity, who aren't strangers to an odd ball record themselves but have stuck true to their core sound and with the quality of their own 2016 effort, Atoma, Anders Fridén, Björn Gelotte, and Peter Iwers need to take a hot sauna with Mikael Stanne, Niklas Sundin, and Anders Jivarp and take along a waterproof notebook. Take note, fellas.

More from In Flames