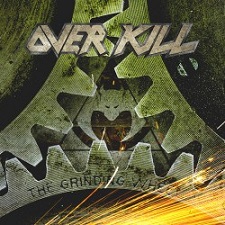 With over 30 official releases to their name, and a history steeped in the traditions of speed and thrash metal, what more can possibly be said for New Jersey's foremost wrecking crew, Overkill?

With the addition of groove metal elements to the band's sound during the difficult and challenging '90s, Overkill avoided the fate of so many of their contemporaries who suffered the wrath of both fans and critics alike for releasing albums that adopted a more 'contemporary' sound. So it was telling, during an interview this scribe conducted with front man and architect of the band, Bobby 'Blitz' Ellsworth, while he was on the promotional trail for new album The Grinding Wheel, he was quick to offer a not to subtle opinion on those bands that stuck too closely to their guns in the same era: "There are a lot of people who went home to go and work for their mum and dad and smoke cigarettes in the basement, and wonder why nobody appreciated their fucking genius.". So that more or less sums up what you are getting on The Grinding Wheel; grooving speed metal that sounds like it has been released for 2017, not 1989.

If you already know and love Overkill, as so many do, you can probably stop reading here and go listen to The Grinding Wheel on your choice of streaming service as it contains all the best elements of the band's output post Horrorscope ('91) and then some. Blitz, the son of an Irish migrant family, has always shot straight and stood within his own truth, and on The Grinding Wheel his famed vocals have never sounded better. It still sounds as if Bruce Dickinson's voice circa Powerslave was put through whatever grinder Brian Johnson forced his vocal chords to endure.

It is Blitz's musical kinship with fellow founding member and bassist DD Verni (a story that will hopefully be told through a biography or even biopic) that keeps the band intact and vital.

DD Verni's bass sounds as though it is using an amplifier powered by a Cummins ISX15 heavy-duty engine. I have long thought that the prevalence of the bass in the mix was due solely to DD's role in the band as a decision maker (most metal bass players will tell you that it is almost essential to stick around for the mixing of an album lest your parts be buried under the clumsy hiss and ego of the guitarists... just ask Jason Newstead), however it was on this album that it became clearer that it is also his contribution as a musician, and not just Blitz's vocal, that sets the band apart, and always has.

Like so many Overkill albums, it is almost impossible to isolate a track for unique praise. So I won't do that for The Grinding Wheel, as that would just be disingenuous of me. Like all Overkill albums, provided you are already in tune with thrash and speed metal, if that's your selection on the ever expanding menu in the house of heavy metal, you won't be disappointed by a single track.

I'll leave it to the man himself to issue a final summary: "There is some groove in there, some traditional heavy metal, there is some hard-core thrash, and there's rock and roll and punk. So I think there are 10 cuts there that each have an individual identity and I enjoy it, we put together a complete record and that was a big success. I hope it does comes across like that to the listeners too."

Rest assured, Blitz, it is and it does!