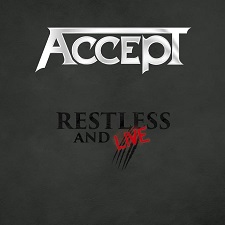 This scribe's initiation to Accept was via a cover of "Metal Heart" by Dimmu Borgir on their compilation album Godless Savage Garden, which was released in late 1998. Having not read the liner notes before listening to the album, I identified "Metal Heart" as the strongest track and naturally assumed it was a Dimmu Borgir-penned song. Fast forward many months later, I was reading a copy of the then latest release of Metal Maniacs magazine. I noticed a reference to the song "Metal Heart" by a band called Accept. Over the next few years I would proceeded to listen to and eagerly read about the exploits of the lads from Solingen, Germany.

With a history stretching back to the late '60s, Guitarist Wolf Hoffmann and bassist Peter Baltes have stayed true through each and every phase of the band's recorded career which commenced with the debut, Accept, in 1979. The 2015 (the year this live albums tracks were recorded) version of the band includes guitarist Uwe Lulis, former Kid Rock drummer Christopher Williams, and New Jersey native Mark Tornillo on vocals.

Few would argue that Tornillo had the largest shoes to fill. Former vocalist Udo Dirkschneider might be an acquired taste to some, however his contribution to the band's success cannot be overstated. The diminutive former front man holds both a commanding stage presence and is perhaps the reason Accept are almost instantly identifiable among the plethora of Teutonic landsleute of the era, courtesy of his booming vocals and uppity lyrical cadence.

Franks Tornillo's energy and faithful yet contemporary take on Udo Dirkschneider's vocals have the potential to bring Accept's brand of high octane pre-thrash to a brand new audience of younger and likely more impressionable listeners. This in turn ensures the band remains relevant and is seen as far more than a nostalgia act jammed with imitators and animated mannequins. Such is Tornillo's influence on the songs, one could parachute into the listening experience on this album none the wiser to Dirkschneider's absence. It has been said that imitation is the sincerest form of flattery, however it is an entirely different proposition to imitate and improve. Tornillo may just have done that.

Drummer Christopher Williams has a similar effect on Accept to the one that Scott Travis had on Judas Priest way back in 1989. Most will know what happened soon after Travis joined Priest (for the uninitiated check out Priest's Painkiller...). Williams' background as a Nashville session artist performing genres as diverse as country, soul, R&B, metal, punk, and funk may not be immediately identifiable on the recording, but what is undeniable is his impact on the manner in which Wolf Hoffmann attacks such classic cuts as "Fast as a Shark", "Balls to the Wall", and of course, "Metal Heart". The songs sound as though they are new, revitalised, and re-interpreted without losing any of the original spark that made the band a rare feature for German acts in the USA through the 1980s.

Restless and Live is far more than a live album, and it can certainly be considered far more than an updated "Greatest Hits". Sure, all the previously mentioned 'hits' are there alongside classics such as "Teutonic Terror", "Restless and Wild", "I'm a Rebel", and "Starlight". This is an album that encourages you to bang your head, sing along to the memorable choruses, and thank Odin that both Wolf Hoffmann and Peter Baltes had the fine sense to bring such capable musicians into the band. That final point ensures the vitality of Accept into the 21st century.