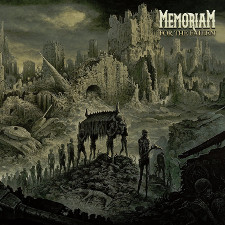 Upfront and in the interest of transparency, I’ve been a Bolt Thrower fan since I heard “World Eater” (from 1989’s Realm of Chaos). When War Master was released in 1991, it cemented my love for the band. The riffs, the vocals, the song dynamics, as much as I loved In Battle There Is No Law… and Realm of Chaos, for me and I’m sure many others, War Master was the perfect storm as far as Bolt Thrower releases go. It set the blue print for everything Bolt Thrower going forward. Having been unable to see their only Australian tour in 1993, I along with many others were looking forward to the band’s long overdue return to our fine shores in 2015. The untimely death of drummer Martin “Kiddie” Kearns a week out from that tour would not only see the band understandably cancel their Australian tour, one year later it was the point where the mighty Bolt Thrower called time on their career.

Since that time, Bolt Thrower vocalist Karl Willets teamed up once more with original Bolt Thrower drummer Andy Whale on a new project. Official formed in January 2016 and dubbed Memoriam, Willets and Whale are joined by a pair of former Benediction members in guitarist Scott Fairfax and bassist Frank Healy and after a couple of low key demo releases, the quartet have unleashed their debut long player titled For the Fallen, which is rounded out nicely with artwork from Paul McHale who did the original artwork on Bolt Thrower’s killer debut In Battle There Is No Law.

It’s almost full circle really. Willets, Whale with artwork by McHale, in a new band that signals the closure of another that allows the various members to embark on the healing process from the loss of Kearns and also Healy’s father a few weeks later, Memoriam is certainly off to an interesting start to say the least.

As you’d expect from just about anything that has any lineage to either Bolt Thrower or Benediction, the riffs are huge. Memoriam is no exception and the opening self-titled cut is absolute testament to that, even if it does contain countless Zakk Wylde like pinch harmonics from Fairfax. Willets’ vocals are a little dryer and not as deep as they were with Bolt Thrower, but in the interests of individuality, that’s totally fine. His performance is solid throughout the eight cuts that make up the band’s debut. It’s hard not to compare the band to the mighty Bolt Thrower really even if only half of Memoriam’s line-up was in that particular band. But the crushing “Reduced To Zero” and ultra heavy “Surround By Death” both have all the hall marks of classic Bolt Thrower - dense riffs, a thick solemn vibe and an overall sense of impending doom that was all too familiar with the likes of the classic War Master album. The album’s closer, which clocks in at a lengthy eight and three quarter minutes is excellent and is well worth the wait to get to it. It’s full of some cool dynamics, good tempo changes and tidy riffs topped with some tastefully simple lead runs.