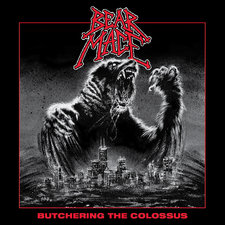 In keeping to the gruesome theme, this is an album that, like a bear trap, will crack both the air and your bones as it smashes closed upon your stumbling across it. With beginnings dating back to 2012, this five-strong band hailing from Chicago lets loose their full-length debut here in Butchering the Colossus. Bear Mace will undoubtedly be new to most reading this, but if you are a fan of tank-like riffs and steam train rhythm in the vein of Bolt Thrower, then read on.

Following the release of the limited release cassette, Kodiak Killers, (GypsyBlood Records) Bear Mace forged its collective appetite for cranium crushing death metal to put out eight tracks of gunpowder-cured carnage. Like gargling on blended organs, Lord Devourer’s vocals are deep and menacing. But, like the mighty Bolt Thrower, they don’t take centre stage, instead tilting the spotlight to the ravenous riffage, bass, and drum rolls. The duo of Crossbow Death and Mike Cirrhosis on guitar lays waste with a demanding blend of unstoppable old school death metal riffs and the odd solo with echoes of Death. The contribution from Steevil Dead on bass and Garry Napalm on drums only cements the raw package of lawnmowered flesh that sits planted deep in your ears.

While Bear Mace isn’t exactly dishing up anything starkly new or shattering to the foundations of death metal, what they do bring here is their interpretation of a style of old school death metal that is executed with a masterful hand. There is diversity in the song writing and quality in the production to make this a very memorable first outing for this Chicago band. There is no weak link to pick on or out of the eight tracks on offer. It’s the sort of album you can very easily listen to from start to finish.

From the stomping opener “Death of a Constellation” through to the skin-flaying likes of “Cyclone of Shrapnel” and “Leave Nothing Here Alive”, Bear Mace devastates with use of the riff and relentless drum attack. “Wheel of Despair” is a standout track with a groovy central riff and the crushing breakdowns.

It may still be a bit premature to throw this out there, but Butchering the Colossus could very well prove to be one of the sleeper albums of 2017 that will surprise many a metal folk.