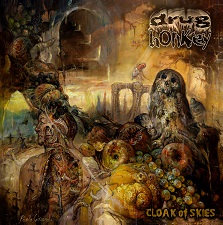 Before receiving this promo, if you'd told me that I'd be reviewing an album from a band named Drug Honkey, I would've laughed, but I can’t imagine I would’ve believed you. Here we are, though, and amusing name notwithstanding, Cloak of Skies is far from a joke.

The material Drug Honkey offer up on Cloak of Skies, the band's fifth full length, makes other drugged out doom albums seem completely sober by comparison. It's a filthy, malevolent descent into the depths of a substance binge gone horribly wrong, and it also happens to be excellent.

Unlike the doom of bands like Electric Wizard, Drug Honkey do not take their influence directly from Black Sabbath, but rather take it from the industrial realm of Godflesh. Their music is underpinned by a thick, prominent bass and a heavy use of effects (reverb, modulation, feedback, etc.), which are applied liberally across the bass, guitars, and the vocals. What's particularly engaging about this is that it's never a one size fits all approach, with particular effects being applied to particular instruments to suit a specific purpose within the context of a riff or an overall mood. Aside from this being indicative of the band carefully crafting what they do, it also keeps things interesting through the inherent unpredictability. There's undoubtedly a method to the madness, but it's hidden well enough to give the illusion of the whole thing being utterly unhinged.

While the band’s heavy use of effects is both interesting and also inextricably entwined to the overall makeup of the album, what’s most appealing about Cloak of Skies to me is how all-encompassing the atmosphere is, despite the inherent challenges introduced by its abrasive and bleak tendencies. The shortest of the album’s seven tracks is a little shy of six-minutes, and the band makes use of these elongated track lengths to develop and nurture the aforementioned atmosphere in an almost hypnotic way through a slow-burning reinforcement of riffs and ideas.

Sometimes the hypnotic approach will be rhythmically derived ala Godflesh (“Sickening Wasteoid”, “Outlet of Hatred”) or, in the case of tracks like “(It’s Not) The Way” and “The Oblivion of an Opiate Nod”, it will be through an almost drone-like approach to the song writing. Variety is the key here, and it’s because Drug Honkey are willing to change things up at a moment’s notice that there’s a feeling of freshness throughout the album's running time, even with the consistent and single-minded mood and tone.

It’s a rare thing indeed for a band to write music that makes me feel as uncomfortable and dirty as Cloak of Skies often does (Deranged’s Rated X and Lord Mantis’ Pervertor immediately come to mind as other examples) and it’s a real pleasure, despite the obvious paradox. This is ugly and frequently challenging music, to be sure, but the deftness with which it’s been constructed should be more than enough for it to appeal to audiences not just within niche doom circles, but also more broadly as well.