Charm The Fury, The 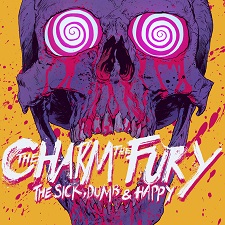 I was very fortunate to have the chance to chat over the phone to Caroline Westendorp (vox) & Mathijs Tieken (drums) one bright morning on the Sunshine Coast. While I am used to degrees of enthusiasm, what I copped from these two was a full frontal barrage of optimism, sheer happiness, and positive energy. They both were very congenial and the allocated 15 minutes was not nearly enough to discuss the creation of the brilliant The Sick, Dumb & Happy.

I'd had an advance copy of The Sick, Dumb & Happy for a while prior to talking to the effervescent duo and I had only really glanced at it. The worst thing about the album is the garish cover artwork and I'm afraid that may put off the discerning metal aficionado as it certainly made me think twice about what lay beneath initially. Believe me, dive deeper, metal comrades, as The Sick, Dumb & Happy is almost as good as it gets in 2017.

Why is it so good? Westendorp adopts the very best of Philip Anslemo circa Vulgar Display of Power ('92) and Far Beyond Driven ('94), injecting it with an alluring feminine pop vocal. What sounds absurd on paper sounds perfect on The Sick, Dumb & Happy. Not sure how much of Tove Lo's Queen of the Clouds ('13) or Rihanna's Talk That Talk('10) Westendorp had been listening to or is inspired by, however the presence of these influences produces an outstandingly fresh vocal performance that balances beautifully the brutality of Anslemo's gravel-throated growl with the cocktails and dancefloor charisma of the Lo/Rihanna influence.

I've no idea who the more prominent guitarist between the two is, however Rolf Perdok and Martijn Slegtenhorst have clearly studied the esteemed output of Dime and read the same manual that Josh Travis (Emmure) reads. These two produce riffs that sit deep in the pocket. No better example than "Down on the Ropes" with its "Cult of Personality" style earth-shattering verse riff. (Referencing Living Colour's brilliant Vivid ('88) album)

During my chat, there was much more than music to discuss with the pair. Disappointingly, some people still view females as less than worthy heavy metal artists according to Westendorp. "There is still a lot of sexism in the music industry. Security would often ask me 'What are you doing backstage?' or ask other band members to 'take this girl to somewhere else'. It's funny how you gets treated in the music industry as a girl. So, that is quite a challenge."

As an avid attendee of gigs in the '90s, my mates and I could best be described as socially awkward yet polite young fellows lacking confidence with the opposite sex. Without sounding crass, we could only wish there were ladies like Westendorp in the bands and in the crowd. I can't tell you how many gigs I have been to over the years where literally the only females in attendance were venue staff...

Get your head around The Sick, Dumb & Happy. It's a seriously worthy heavy metal odyssey.