Eternal Rituals for the Accretion of Light 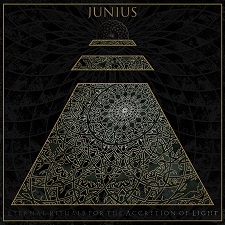 Ever since I was introduced to them via their second album, Reports from the Threshold of Death, back in 2011, I’ve loved the idea of Junius more than I’ve loved the reality of them. The band’s dreamy take on post-rock - and I guess metal - is an appealing one, but I found that Reports (and to a lesser extent, the follow-up EP, Days of the Fallen Sun) relied too heavily on a very similar set of ideas which, while admittedly a very good set of ideas, just didn’t have the legs to keep me engaged across its 42-minutes.

Eternal Rituals for the Accretion of Light (ERAL henceforth) arrives some six years after Reports from the Threshold of Death, and it sees Junius continuing to refine their atmospheric, shoegazey rock while also delving into territory that’s a little heavier and more progressive as well.

For me, the strength of Junius has always been in their ability to craft a mood and to bring you, the listener, along for the emotional journey, and things are no different here. Guitarist and vocalist Joseph Martinez (now flying solo) has an uncanny ability to find just the right intersection between introspective and often understated riffs and his softly delivered but no less powerful vocals, and it is this synergistic relationship that I feel is the real force behind the band's emotive weight. Clearly the band recognises this as well, because, as with Reports, it is the primary driver of ERAL as well.

From opening track “March of the Samsara” through to the sixth, “The Queen's Constellation”, Junius brings us the kind of contemplative and grand material that is practically their calling card by this point. No, it's not really vastly different in spirit (or form) to anything else we've heard from them before, but it's no less potent this time around either. The riffs, the synths, the hooks, and the big, swelling melodies are all where they should be, and are just as effective as they ever were.

On late album tracks “Telegraphs & Pyramids”, “Masquerade in Veils”, and “Heresy of the Free Spirit”, Junius delves into far more moody territory which, while good from the perspective of variety, is ultimately hobbled because frankly, these just aren't particularly interesting songs, and their plodding, almost go-nowhere composition kills the listening momentum before the much stronger album closer, “Black Sarcophagus”, arrives. It's a shame because one of my chief complaints with the band is the relative similarity between their songs, or at least the underlying ideas, so it's great to see some different approaches at play, but unfortunately these diversions didn’t really work for me at all.

Junius is a band that I really want to do well because they consistently come so close to writing an album that blows me away, but as before, ERAL just didn't have enough in the tank to make it the whole way for me. But even though I didn't find ERAL to be the triumph that I was hoping it would be, I can happily say that Junius still have me on the hook, despite my ongoing qualms and reservations. I leave this album still holding out hope that they can completely reel me in someday.