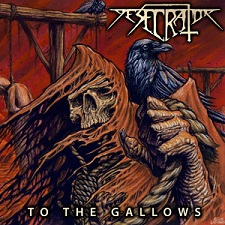 Melbourne quintet Desecrator deliver a punishing thrash and speed metal extravaganza on their first full length album, To the Gallows. With a release this potent Desecrator could well be the next Australian band to gain a significant following Stateside.

Riley Strong is the charismatic front man, guitarist, and vocalist for Desecrator. I recently had a chat to him over the phone and was impressed that he is a fan of heavy metal and associated culture first and foremost. The bloke lives and breathes his craft. So it is with good reason that To the Gallows sounds like it could well be the underground cousin to Trivium's earlier work on Ascendancy ('05) and The Crusade ('06).

Now I appreciate many of the kvlt and trve metal aficionados won't take kindly to that comparison but it is important to recognise Trivium's impact on thrash and speed metal post-new millennium. Matt Heafy may not be to everyone's tastes and Trivium's output since the outstanding Shogun ('08) has been less than stellar however they were almost singularly responsible for bringing Burton era style Metallica back into mainstream favour. To the Gallows is good enough to fill that void now that Heafy and co. are stumbling through a mid-life identity crisis and a new drummer on each album.

To the Gallows has a ragged sheen that fans of Kreator will identify. It's a production style that may have been the influence of one Jason PC Fuller of notorious Melbourne grind-bastards Blood Duster. I couldn't work out if he was a producer or helped record the album however I'd suggest he had a say over the sound of the album.

The ironically titled "Thrash Is a Verb" will give the circle pit a work out. The Kreator-esque "Serpents Return" offers far too many head banging moments and the highlight track for mine is the acoustically laced "As I Die". Like the many less electrified moments from Metallica, Megadeth, and Pantera, "As I Die" fits well into the rest of the album's narrative without detracting from the white knuckle intensity surrounding it.

Strong has a keen sense of Australiana. If the Thunderdome exists in an alternate dimension then Desecrator could only be the house band. Mad Max references are synonymous with the band and the two are better for it. I always hoped a worthy outfit would assume the mantle given the apocalyptic scene-scapes in all Mad Max films lend themselves to molto allegro heavy metal. Strong also informed me that his daily drive is a two-tone HZ sedan with a 253 Holden V8 engine and he keeps a HQ wagon with a 350 Chev engine in a garage. Strong, with his trademark skullet and menacing leer he could easily fit right into a Mad Max panorama.

To the Gallows is an album that can actually stand near thrash classics Ride the Lightning ('84), The Legacy (Testament '87), Coma of Souls (Kreator '90), and Ignorance (Sacred Reich '87), I can't offer higher praise to an album.