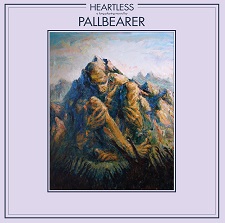 Melodic doom metal band, Pallbearer, impressed doom lovers across the globe with their excellent 2012 debut, Sorrow and Extinction, and we all rejoiced in the splendour of their 2014 sophomore release, the Billy Anderson produced Foundations of Burden. The latter lit a fire under the ass of the entire doom genre and for anyone that was still sitting on the fence of what is essentially a love or hate form of heavy music, had to stand up and take notice.

Pallbearer have just released their stunning analogue, self-produced third record, Heartless. Opener “I Saw the End” is literally sheer musical brilliance, with moments of stunning guitar melodies and harmonies like Iron Maiden high on doom. This is swiftly followed by first single “Thorns” with its thick, heavy chugging and crunchy riff; the guitar tone is like rich chocolate cake. While both songs are on the shorter side for Pallbearer, emphasis must be put on the fact that they are songs and great ones too. I would be thrilled if future records consist of even more similar compositions.

“Dancing in Madness” is the first of only two songs that surpass the 10 minute duration and when compared to their previous output that is a significant difference. However, this particular song does probably best represent the Pallbearer we have all come to know and love and I would hold it in such high regard as both “Worlds Apart” and “Watcher in the Dark” from Foundations of Burden. The peaks and valleys must be experienced as words are almost pointless to describe it from a musical perspective.

Vocalist/guitarist Brett Campbell has a unique and very emotional voice within not just doom or metal, but within music of this day and age, and the man can sing. He particularly shines at around 8:54 on “Dancing in Madness” and we’re treated to some rather aggressive, gang like vocals in the heavy crusher “Cruel Road” which is a nice surprise amidst what is primarily an endless stream of multi layered vocal melodies and harmonies. The title track is also a mandatory listening experience.

Pallbearer manages to effortlessly pull at your heartstrings one last time with 12 plus minute closer “A Plea for Understanding” with its slowed pace of sheer sadness and melancholic doom, sans any real heaviness. Overall, Heartless does come across as the bands least doom sounding record, in the true spirit of the genre at least, yet it is filled with many progressive and heavy rock elements. The emotions present throughout Pallbearer’s music, the emotive guitar leads and melodies are in abundance, a truly exceptional talent that can’t be easy to achieve.

With Heartless, Pallbearer has proved they are anything but. Lay your soul to rest with what is one of the most anticipated and must surely go on to be one of the most successful releases of 2017.