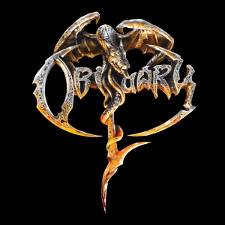 It’s equally easy as it is challenging to review a new release from Obituary. “How is that possible?” you may rightly ask. Well, consider this - it’s a generally safe rule of thumb that Obituary is a known quantity with respect to knowing what to expect from an Obituary release. It’s easy because you know what to expect within certain parameters that the band have barely strayed from over the course of almost three decades. Conversely, it’s challenging because one must have the ability to separate the albums with a keen ear. Sure, there are worse problems to have but when it comes to reviewing releases from these Floridian death metal masters, well, this one is right up there as far as this humble scribe is concerned.

Right off the bat, the band’s tenth long player is immediately identifiable, even if the subtle self titling of the release wasn’t enough to give it away. The unmistakable guitar tone of riffmaster extraordinaire Mr. Trevor Peres once again quickly eases the listener into another relentless slab of Obituary-style death metal. Coupled with the brutal pace and inimitable vocal style of the king of rotting ways, Mr. John Tardy, the opening cut “Brave” is short and to the point and leaves no ambiguity regarding the album overall and Obituary’s intention to destroy ear drums.

With the air of predictability that is associated with a new Obituary album, there’s also an air of expectation that is coupled with it as well. Obituary, the album, is no different. Relatively hot on the heels of Ten Thousand Ways to Die (which surfaced late 2016), Obituary continues on in very much the same vein of not only the band’s unique, well-established style but also the pair of original tracks that adorned that release. Interestingly enough, only the title track of their previous album makes it onto the final product here. It sounds a little different to the rest of the album mix wise but there’s no mistaking the song’s heritage.

To be fair, whilst there’s nothing that one would consider ground breaking or incredible on Obituary, it’s clear that this quintet is set in their ways. Sure that makes it hard to satisfy not only their own needs as songwriters and musicians but also the needs and expectations of their many fans. Obituary is a solid slab of traditional Obituary style death metal. It delivers everything that the band’s fans should expect. With another ten tracks under their belt with album number ten, I think Obituary are once again ticking all the boxes in delivering the best of both of those worlds.

What is also evident at this point is the fact that the band is comfortable with their collective lot in life. Ten albums and three decades into their career, they have few peers that can put a claim on those kinds of numbers, and Obituary’s comfort in doing what they do is none more evident than on this album. Truth be told, their shtick has been confirmed for quite some time. If nothing else, Obituary is yet another album that goes on to confirm that mantra. There’s absolutely no doubt that this album will satisfy fans no matter how long they have been lapping up what Obituary have to offer. Classic? No, probably not. Killer? Absolutely.