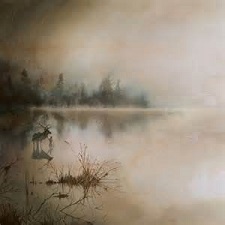 While I understand that many view 2009’s Köld as Sólstafir’s watershed album (and they may well be absolutely spot on for all I know as I’ve not heard it), I wasn’t introduced to the band until their 2011 album, Svartir sandar - which I suspect will be a story that rings true for a lot of other people as well considering the band’s move to Season of Mist at the time.

Even though Sólstafir aren’t the first band (and definitely won’t be the last band) to straddle a post-rock and vaguely metal line, they have definitely proven to be one of the better examples over their last two releases - Svartir sandar and 2014’s Ótta - because they possess the enviable skill of being able to craft an evocative and captivating atmosphere in addition to their knack for being able to write deceptively simple but no less brilliant melodies.

I’d be lying if I said that I was champing at the bit for Berdreyminn - the band’s sixth - when it was announced, but it's here nonetheless and it sees the band stripping back the dreamy atmospherics of Ótta and replacing them with a more minimalist approach more akin to hard rock. To be honest, this is pretty much the last thing I wanted to hear from Sólstafir because their enveloping mood is actually the attribute that I like the most about them, but despite this, all is not lost.

The band's penchant for writing a catchy hook is still firmly in place on Berdreyminn, with numerous examples to be found throughout its near hour-long duration (such as two-minutes into “Ísafold” or three-minutes into “Nárós” to name but a couple), but the minimalism and the greater focus on driving rhythms has a more disappointing side effect than one of pure aesthetics: the album feels far less cohesive than previous offerings have.

Even though I've found quite a bit to enjoy on Berdreyminn, I've not been able to shake the feeling that it is an album that is made up of a number of high points as opposed to it being one that is made up of great songs overall, and the glue that binds the songs together is ill-defined for me. Whereas an album like Ótta always seemed to make narrative and thematic sense to me, thus making the listening experience one that had an obvious beginning and end, I can say no such thing about Berdreyminn, with the result being an experience that isn't unpleasant but also doesn't quite click in the satisfying way I've come to expect from the band.

Nowhere is the lack of satisfying cohesion greater felt than in the album’s back half where the pacing stutters and drops off a cliff before eventually finding itself again on album closer, “Bláfjall”. These four final tracks broadly fall into two categories: those that take forever to go anywhere interesting (“Hvít Sæng”) and those that don’t really go anywhere interesting at all (“Dýrafjörður” and “Ambátt”). None of these four songs are terrible by any means, but neither are they particularly strong, often feeling directionless, meandering, and, frankly, a little uninspired by Sólstafir’s standards.

I don’t want to be too tough on Berdreyminn, because despite its issues it’s still a solid enough album, but Sólstafir has given us good reason to expect a hell of a lot from their releases and album number six just wasn’t able to live up to the high watermark for me.