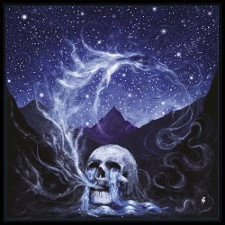 Dennis Mikula is the driving force behind Ghost Bath and Ghost Bath are one polarising band. During the promo rounds for Moonlover, Mikula never corrected media assumptions the band hailed from Chongqing, China. This lead to peculiar articles about the band with one source even alluding to Ghost Bath's existence as evidence of "China's thriving underground music scenes" among other well intended plaudits. Deafheaven guitarist par excellence Kerry McCoy accused the band of little more than mimicry when he said "They stole everything about their whole shit from us". Frankly it's hard to disagree with McCoy. The similarities between Moonlover and the all-time classic Sunbather (yes... I think it's a landmark album) have been well covered elsewhere so I won't regale the reader here.

For many fans of the blackened arts, it has been hard to take Ghost Bath seriously. I get the feeling that many listeners were waiting for Mikula to confess that the project is indeed a bit of a laugh and that we can all stop guessing. Instead he has put together a relatively capable band and leant on some his more obvious strengths on Starmourner. Regardless, the question still remains: DoesStarmourner allow Mikula and co. to stand on their own feet and distance themselves from the Deafheaven comparisons and any controversy surrounding their place or origin?

I'll start to answer the question by referencing Deafheaven again. McCoy and co. doubled down on everything on the epic New Bermuda ('15). McCoy's grounding in more traditional speed and thrash metal become more obvious on New Bermuda yet it was at no expense to their famed blackgaze signature sound. On Starmourner, Mikula has done something similar by integrating a more traditional black metal sound into their repertoire. Moonlover was average blackgaze so I'd almost venture to suggest that Starmourner is akin to average black metal.

There are serious flaws on the album that I really do hope the band address on future releases. I genuinely believe there is some gold to be mined within the bands creative lexicon and they should improve on the next album given the progress from Moonlover to Starmourner. I could be missing something however as a reviewer I feel it is best to shoot straight with the reader.

I have no doubt that what I perceive as a flaw in the band's sound is entirely intentional but I cannot understand why Mikula's vocal, in tandem with the dire sound of just about every guitar lead onStarmourner gets the nod of approval during the construction of each song.  I'd implore Mikula to stop the yelling and recruit a genuine black metal vocalist, then find a guitarist as skilled as McCoy to inject better technique thus better guitar leads.

This will sound absolutely naff but the band's sound reminds me of Harold Faltemeyer's "Top Gun Anthem" ('86). On Faltemeyer's all-time classic, ambient passages build then crash into a wall of Steve Stevens (Billy Idol, Michael Jackson) tremendous fretwork. Stevens, as one of the greatest guitarists in rock, offers a lead break and solo passage that is still an aspirational challenge for many budding guitarists. The lead guitar breaks on Starmourner are as crucial to the architecture to many of the songs as Stevens's playing is to the "Top Gun Anthem", yet the playing lacks finesse, feel and composure. The track "Luminescence" is a prime example. The actual idea of what the band is trying to achieve is a good one, it just lacks polish and execution.

Assuming it is Mikula who peened the albums bookends, "Astral" and "Ode" he can write superb ambient track. Maybe this is where he needs to focus?

Iceland's Árstíðir Lífsins released the tremendous Heljarkviða earlier in the year, an album that will probably only reach a very limited audience. I said in the review for Heljarkviða that  it would be hard to best as the black metal album of the year and Starmourner highlights just how far off Mikula and Ghost Bath are from offering entertaining, original and sonically interesting blackish metal.