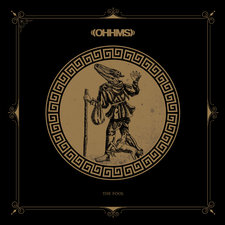 With the debut release of Bloom in October 2014, Kent’s (U.K.) OHHMS sidled up warmly to fellow The Metal Forge contributor Simon Milburn. And when 2015’s Cold came out, that was that – Mr. Milburn was won over and anything that followed from the Brits couldn’t come any sooner. I accompanied these two reviews and appreciated the refreshing sound and approach the band took on a sort of post-rock vibe with hefty riffs and strong influences of stoner and sludge metal.

Both Bloom and Cold run for over thirty minutes and consist of just two tracks. They are also both considered EPs, which is interesting because often you will listen to a full-length album of ten tracks or more that runs for just as long in duration. I digress slightly. The Fool is OHHMS debut full-length studio album and is six tracks of around an hour’s worth of music.

What’s very pleasing to hear and experience with The Fool is that it is a clear sense of progression from OHHMS. Bloom was edgy and raw; Cold had this darker shade to it with the beginnings of much more textured melody and now with The Fool there is that feeling of the band taking stock and piecing together what’s come before. They sound almost more serious and as the opening one-minute instrumental “Shuffle, Cut and Reveal” saunters by, it’s nothing you have heard before from them and it immediately begs the question of what this album will bring to the table.

The thick, mind-bending riffs are still there and sound just as sumptuous. Paul Waller’s vocals are in great shape and “The Magician” punches with that same grit and pulsating energy before breaking into an epic passage of melody. It’s a very nicely weighted song and again, suggests of progression and a confident sense of ease. “The Hanged Man” is the first of two much longer songs that make up The Fool and it has a much less feral feel to it. Waller gruffly puffs out his vocals to a crushing post-rock sound of jabbing riffs and very smart drumming from Max Newton.

“The World” showcases Waller’s full vocal range and is quite melancholic while still gently boiling with angst. “The Lovers” follows and commences with a soft and slow psychedelic lead-in that introduces female vocals in a duet with Waller like no one has heard him before. These eight minutes are somewhat disconcerting both for the contrast the song presents in relation to OHHMS as we know them and even this album. In all of the song’s delicacy and sparseness, it’s a bold addition from the band.

Nearly twenty-two minutes are what make up the final chapter to The Fool. “The Hierophant” (and by now you would have picked up the connection in the song names as being different Tarot cards) very slowly builds and echoes the sort of challenging sound we came to know OHHMS for with Bloom and Cold which optimise them as not a band for everyone. It’s the second half to this final song which rewards you for your patience.

So to all those who were asking: ‘where to from here?’ after Cold, OHHMS has come back with an emphatic answer. This is a band with something special and long may they continue to do what they do.