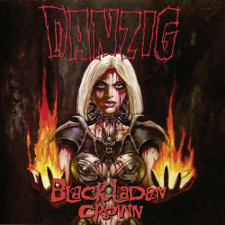 Let’s get something straight right from the get go. How good are those first three Danzig albums? There are so many good cuts across the four years that brought those fine releases to our ears. Whilst some artists have managed to deliver some solid albums after an initial peak such as that, sadly, for Danzig, it’s been a case of things being more miss than hit when it comes to anything post 1992. To be fair, possibly, just maybe, that could be stretched to include 1994’s Danzig 4. That one could be an argument to be had at another time.

In all honesty, the only post 1992 Danzig album that I really dug was 2010’s Deth Red Sabaoth. Whilst it is not perfect and it is certainly a fair way from the any of the group’s seminal efforts, it is decent enough in my books. Now, in fairness, I’m not going to comment on Skeletons. The less said the better on that one. But I feel it’s my duty to comment on the group’s tenth studio album, dubbed Black Laden Crown.

I’m not entirely sure where to begin with this one. There are so many starting points, and to be quite frank, almost none of them are pleasant. Right, so maybe I should focus on the positive here. The album’s brightest moment is the final track, “Pull the Sun”. It’s not a rockin’ track per se. It just simmers effortlessly, boiling just under the surface with a darkness that one would expect from anything Glenn Danzig puts his name to. It’s so simple yet so damn likeable. To be honest, if only there was more of this across the rest of the album then the rest of my review wouldn’t be so harsh.

To be frank, overall, it’s all a bit shit when it there is 40 minutes of dull, uninteresting and generally inconsistent muck that one has to wade through just to get to the best bit which is only a single track. The other eight tracks on here are chock full of boring guitar parts, pathetic lead breaks and guitar harmonies that sound almost out of tune by a fraction of a tone. Don’t even start me on Danzig’s lethargic vocals that really sound like he’s in need of an oxygen tent when singing. At times, Danzig sounds like he’s nowhere near the mic and other times, it sounds like he is trying to devour it because he missed lunch.

The overall consistency of the sound quality of this album is a big issue. As well as the aforementioned vocal distance issues, I can hear clipping here and there as well and that just shouldn’t happen in this day and age with all of the technology afforded to artists. What also does not help with all of this is the guitars. Boring, bland riffs aside, guitar parts above the riffs sometimes sound as if they are a fraction out of tune, and don’t even start me on some of the “lead breaks” that sound like they are being performed by a teenager who has been playing for about six weeks but thinks he’s Eddie Van Halen. I’m sure that’s not the case but it sure as hell sounds like it at times.

I really don’t know if I could recommend this album to even the most diehard Danzig fans. Sure Danzig is getting up there in years. Hell, we all are. Well, some of us. Ok, well, this reviewer is slowly but surely. But really, this is the weakest Danzig album in sometime. Perhaps it would be a different story if at least some of those issues above were corrected – specifically the sonic and inconsistency issues more so than anything else. Then, maybe then, this might scrape by. But when all of these problems are in the same melting pot, the end result is a diabolical mess that is best avoided.