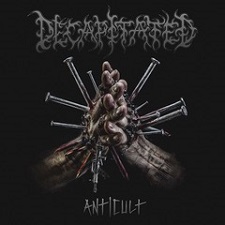 Anticult is the seventh full length studio album from Polish death metal titans Decapitated, and it's also one of their more immediate releases with a focused effort to produce more concise songs that get straight to the point.

Wacław "Vogg" Kiełtyka is Decapitated’s main man and visionary. He is also one of the very best guitarists producing thrashified death metal since, well… since ever. Vogg’s guitar playing isn’t just the lynchpin of the band’s sound, it’s a powerful statement of supreme death metal guitar performance that any aspiring guitarist who places speed, technicality, precision, and impeccable note placement would do well to emulate.

The use of some unique tones across the guitar solos is the first thing that starts to separate Anticult from the band's prior releases. I had to listen to the album a few times to really start to put my finger on what else felt different about Vogg’s guitar tone but I think I’ve nailed it by observing that he has removed some of the gain, thus deploying the ‘new’ tone against some of the most memorable riffs he has ever conjured. A quick glance over some bulletin boards debating the actual gear and set up he uses almost universally rounded back to the fact that Vogg has one of the sharpest playing chops around… it’s all in the wrist, in the picking hand and his excellent form when shaping a chord.

The guitar solos in “Earth Scar” and “Never” would make Trey Azagthoth blush. That’s an important point as sources claim that Vogg auditioned for Erik Rutan’s vacant side of the stage in Morbid Angel way back in 2006. History determined that former Zyklon and Myrkskog guitarist Thor Myhren (AKA Destructhor) would obtain the role however it is fascinating to ponder how MA would have sounded with Vogg in the band. Dan Vadim Von is the most recent arrival in MA, replacing Myhren, but I think I can say that both Vogg and the relatively unknown Von are in the bands they were destined for.

Rafał "Rasta" Piotrowski has very capably filled the role of the band's vocalist for three releases now. The tragic exit of his predecessor must have cast a long shadow over his entry into the band yet Rasta has continued to grow and on Anticult offers an excellent accompaniment to Vogg’s musicianship.

The drumming and percussion of Michał Łysejko relies rather a lot on filling the sound out thorough extensive use of cymbals, both crash and ride which isn’t high on my list of preferred percussive additions when it comes to the extreme metal genre. In lesser hands, this can be a disaster yet Łysejko and Vogg have worked well with producers Wojtek and Slawek Wiesawski to ensure the cymbals don’t bleed over into the other instruments. Like so many extreme metal releases, bassist Hubert Więcek performs admirably yet not too audibly.

I’d be curious to understand why a guitarist was required to fill the bass playing role (as Więcek’s predecessor was also a guitarist playing bass) yet I am sure Vogg has good reason; maybe it's due to the band's original bassist (Marcin Rygiel) being such a tremendous talent on the five string that replacing him with a seasoned bassist is a bridge too far? Another question ready for my next chat with Vogg!

Anticult is one album I can say without reservation that I will be playing well after review commitments have finished. There are many great examples of stellar guitar playing across death metal, and Vogg’s playing on Anticult is one of the finest examples I can offer. There are simply too many highlights from him across the album to mention, yet I will say this: Every riff sounds full of intent; every solo is tuneful and melodic; the use of light and dark shades in the guitar's tone brings another dimension to the band’s sound that we have only heard sparsely on previous Decapitated releases.

‘Getcha Pull’ from Anticult as the great Dimebag would say!