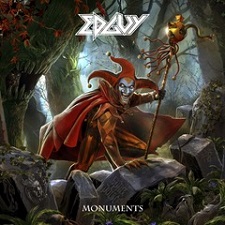 There is a fair bit of kit to get through when discussing this outstanding release from German power metal quartet, Edguy. If one is a dedicated fan, passionate about the band and the music they have produced over 20 years, then they have produced a real treat for you. Conversely, if you are a casual observer keen on hearing a compressed version of the band's catalogue, then Monuments is an excellent summary of the band's career.

I'll offer an inventory and go from there. The full Monuments package contains: 22 tracks spanning the band's career to date, five new or unreleased tracks, a DVD of a performance from the band in Sao Paolo, Brazil, from 2004, and the band's music videos. The limited edition version will include a coffee-table book containing material covering the history of Edguy, 160 pages showing unpublished photos from the private archive of the band members and their friends. Quite a package!

How easy it will be for Australian fans (or fans from anywhere) to obtain a copy of the version containing the coffee-table book remains to be seen. I imagine rather a few of you out there will want this version so I suggest you pre-order before the release date which is July 14th.

Of the 22 tracks that made the 'hits' collection, I am not familiar enough with the band's full catalogue to know all the bangers from the faders in the sense I could name-check a Maiden hits package, yet I sense the band knows their audience well enough to include only what the fans expect with a notable exception. "The Pharaoh" missed the cut and I would have typically held this track as the premier example of the band's sound. "Mysteria", "Superheroes", "Lavatory Lovemachine", and "Tears of a Mandrake" are all present and made the cut so it is still an entirely worthwhile career snapshot.

I had an interesting chat to one of the band's guitarist's, Dirk Sauer, about Monuments and the band's career recently. Sauer offered broad commentary about Edguy's beginnings and the challenges that the '90s offered, particularly so when starting a melodically focused metal band with Halford/ Dickinson-esque vocals against a prevailing narrative of grunge, groove metal, and the dying embers of '80s party/glam metal. The key point I took from our discussion is that the band are passionate about what they do.

This isn't a band that was to be dissuaded and coerced into releasing music that better reflected the popular sounds of any given time. I feel that a lot of the good-will toward the band stems from metal fans deep appreciation for those bands that are dedicated to producing high quality metal from their chosen genre.

I will be the first to acknowledge that power metal is hardly my preferred genre of metal. I'm not much of a rap or hip-hop fan either but I can certainly appreciate quality in all its various guises. On Monuments, Edguy have achieved precisely what they wanted... an aural and visual career retrospective for their dedicated fans all over the world.