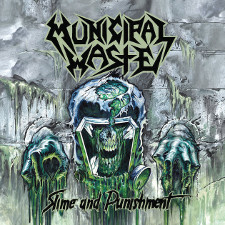 I’m sure many of us remember the first time we heard Municipal Waste. Waaaaaaay back when Earache Records were actually still fostering new talent instead of milking their heritage roster for whatever they can get, a little known band and album came along in the form of 2005’s Hazardous Mutation. What a cracker of an album that is, eh? It’s almost a teenager now at twelve years old and it’s still one of the best party thrash/crossover albums in the modern era. But honestly who thought they could top it at that point? Sure enough they did with the now decade old The Art of Partying which brought to life such classic lyrics as “Municipal Waste is gonna fuck you up”.

To be fair, I’m not sure Municipal Waste has changed much since then really. With track titles like “Breath Grease”, “Shrednecks”, and “Bourbon Discipline” I think it’s fair to say that it’s business as usual for the Waste on album number six. If there’s one thing that is surprising is that it’s been five years since the band’s last release, 2012’s The Fatal Feast, which was their first for Nuclear Blast Records and their first post-Earache release.

But whilst they might have changed labels a few years back, musically not much has changed within the Municipal Waste camp.  Stylistically speaking, Slime and Punishment is absolutely stock and everything that you would expect from these Richmond, Virginia (U.S.A.) party thrashers. Possibly the only real difference is the recruitment of a second guitarist - Nick "Nikropolis" Poulos - in 2015. From an album point of view, there is minimal impact. It might thicken up their sound and provide a compliment but I suspect this addition’s biggest impact will be evident when seeing Municipal Waste live again.

But looking at this album on paper, fourteen tracks clocking in at just under 29 minutes – that’s pretty intense by anyone’s standards, except perhaps Napalm Death who are pretty much unfuckwithable in that regard. But still, those stats suggest that this is Reign in Blood and Legion level shit as far as those numbers go. But the thing is, Slayer and Deicide contrasts aside, it’s not as full on as you might thing. It’s Municipal Waste doing exactly as they have always done.

I usually like to write a lot more about albums when it comes to putting my thoughts down but really, when it comes to Municipal Waste, there’s not a lot else to say. It’s fast, silly, fun, and it’s in your face. Municipal Waste is back and whilst it might have been five years since their last release, there’s little doubt that there’s a level of comfort here that makes this album feel like your favourite pair of old slippers. It might not be their finest hour but there’s little here that would disappoint fans. Party on, Waste style.