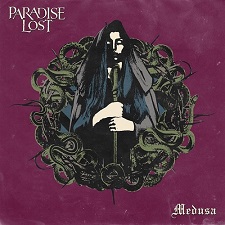 To this day, Paradise Lost's 1995 release, Draconian Times, remains one of my favourite albums of all time. It also has the dubious honour of being the last Paradise Lost album that resonated with me for the nearly 15 years leading up to 2009’s really strong Faith Divides Us - Death Unites Us. Since that time, the renaissance of heavier, back to roots Paradise Lost has flourished, with a further two albums continuing the momentum begun with Faith Divides Us. Upcoming 15th full length, Medusa, sees Paradise Lost continuing to dig into the heavier side of their sound but have come back from the creative well with a slightly less full bucket than their years long upward trajectory might have indicated they would.

Kicking things off is the gargantuan eight and a half minute “Fearless Sky”, which is uncharacteristically long for Paradise Lost (to the best of my knowledge, the last time they wrote a song even close to this length was way back on 1992’s Shades of God). Impressive length aside, what “Fearless Sky” achieves (aside from being a pretty solid track in and of itself) is to introduce the morose tone and thick and heavy production that will serve as consistent fixtures of the album. The bulk of Medusa’s heft comes courtesy of the prominence of Stephen Edmondson’s bass and latest recruit, Waltteri Väyrynen’s drums, and their respective contributions to the way Medusa sounds are critically important, but special mention should also be made of the truly excellent contribution of Nick Holmes who has turned in a stellar vocal performance both in the clean and growled departments.

While the opening two numbers are decent enough tracks, Medusa doesn't really begin to get into a groove for me until “From the Gallows” rolls around at position three, ushering in a mostly strong six track run of the kind of material that harkens back to Paradise Lost’s initial period of heavy death doom. There are a couple of songs in this block that are definitely weaker than others (“Medusa” and “No Passage for the Dead”), and I think there’s a pretty convincing argument to be made that rocky, upbeat album single “Blood and Chaos” probably could’ve happily been left off entirely, or at least shuffled out of penultimate position, but the remainder of these songs offer up an enjoyable dose of gloom from the resurgent veterans.

If I had to make a nit-picky complaint about Medusa (other than those previously mentioned), it would be that every once in a while, the album can sound a little bit like it plays out like Paradise Lost by numbers. I realise that this is probably an uncharitable observation considering we’re talking about a band that will be celebrating its 30th anniversary in 2018, but the fact remains that while it’s a strong album with a lot of laudable qualities in its arsenal, genuine compositional surprises simply aren’t one of them. That a long-running band can turn out material of the quality of Medusa is an impressive feat, and I’m not really having a swipe at Paradise Lost for sounding like Paradise Lost, but I can’t help but feel as though there’s the slightest niggling hint of predictability at its core. I can’t honestly see this as being something that will detract from anyone’s enjoyment of the album, but it was there for me nonetheless.

While I don’t think Medusa stands as Paradise Lost’s crowning achievement, the fact that they are still writing compelling music 30 years and 15 albums into their career is truly impressive and is worthy of nothing less than the highest of praise.