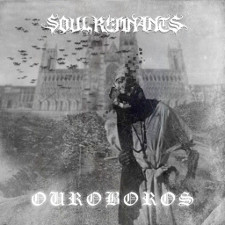 I first came across Littleton, Massachusetts (U.S.A.) quintet Soul Remnants when I reviewed their 2013 long player, Black and Blood. I still spin the album here and there these days in amongst the slew of new releases that do come in. There was something about that album that, although it was strongly influenced by the old guard of death metal, that allowed it to sound fresh and interesting within the genre. That in itself is somewhat of a rarity these days and no doubt one of the big reasons as to why it’s still an album I go to from time to time. That’s more than I can say for a lot of the things I hear these days regardless of genre.

Keeping that in mind, I was eager to see what Soul Remnants have delivered after four years since their last outing and after a couple of spins, it was worth the wait. Thankfully not too much has changed within the Soul Remnants camp since that time other than the band honing their craft. Ouroboros is a more mature, maybe even more diverse sounding album than its predecessor in terms of song writing mostly but ever so slightly in terms of production as well.

The guitars are sounding just that little edgier and clearer on here compared to Black and Blood. The rhythm guitar tone has the greatest improvement in this department. The kick drum has taken a bit more of a back seat and whilst that may upset drummers who are reading this review, when you compare the mix of Ouroboros compared to Black and Blood, their latest album is easily the best the band have sounded on record. It’s a well rounded mix that allows all elements of the band’s crushing blend of death metal to shine through.

The songs themselves are quite simply top shelf examples of modern day death metal. They mix elements of traditional death metal bands such as Death and Morbid Angel with touches of melodic death metal era Carcass as well as shades of progressive death metal as well. Song writing wise, they manage to effortlessly shift from old school, bludgeoning death metal that relies on cutting riffs, searing leads and guttural vocals. The best example of that is the album opener “Mechanical Synapse Modulations” – a title that sounds like a mix of equal parts Fear Factory, Meshuggah and Carcass and sonically sounds like none of those bands.

In amongst that kind of raw energy are more dynamic tracks that enter Spiritual Healing Death era as they swap tempos and vibe with ease. The excellent “Walled City” is a strongest example of that and possibly the most adventurous track on the album. The other seven songs, including the almost early Opeth sounding at times “Dissolving Into Obscurity” and the haunting instrumental “Decomposition” also add plenty of diversity to this compact 37 minute album. The album’s finale has a strong modern melodeath feel to it and that’s not a bad thing at all as it shows yet another facet of the band’s style.

Throughout Ouroboros, the band twist and turn through various death metal elements and whilst that may sound like an inconsistent ride, they do come out on top once again. I’ve little doubt that Ouroboros will be another Soul Remnants album that will pop up on my playlist from time to time. Their brand of death metal is full of surprises but at the same time, solid and refined. Soul Remnants deserve more attention than they get. Hopefully this album will help elevate their status.