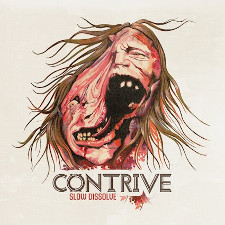 Melbourne (Australia) metal act Contrive aren’t exactly the most productive band around. Forming in 1999 by twins Paul and Andrew Haug who then recruited bassist Tim Stahlmann to complete their line-up, it be another six years until their excellent debut long player The Meaning Unseen would see the light of day. Five years later, their sophomore effort The Internal Dialogue showed signs of the trio moving away from their more straightforward hard rock/metal beginnings to a more progressive bent. The album was generally inconsistent and didn’t have the same impact as their debut regardless of the fact that it was mixed by Devin Townsend.

Seven years on, and the group, who are now a duo after the departure of Stahlmann, have returned with Slow Dissolve, an album that almost didn’t see the light of day. During the creative process, the sudden passing of their father devastated the Haug brothers. Turning their world upside and inside out, the future of Contrive was the furthest thing from their mind. Eventually regrouping, the pair pushed on harder than before with their father as guiding inspiration.

That sort of time between albums can reveal a lot of change within a band. I’m looking at you, Metallica. For Contrive though, their return didn’t reveal drummer Andrew Haug suddenly sporting eyeliner underneath the Cuban pimp look and brother Paul (vocals/guitars) with short hair and head to toe tattoos that resemble a lost battle with a packet of crayons. It was merely the band completing what began on their previous album and the result is their most focussed and expressive effort to date. It’s an album where the band explores different aspects of heavy when it comes to metal.

From the opening bars of “Connect-dead”, it’s clear that the band have shifted into more complex territory. The track feels like a slow burn initially but soon enough, the infectious combination of groove, song dynamics and the pedestrian pace at which it unfolds makes for one of the albums highlights. The song is a strong opening statement of intent and one that sets the bar high for the remaining seven tracks. As the album progresses, it’s clear that the Haug brothers have found the right balance of aggression and dynamics. The in-your-face attack of “What’s Mine” could easily sit along material from The Meaning Unseen. The same applies to “Throwaway” and the excellent title track the closes the album out. But, at the opposite end of that spectrum is the album’s incredible centrepiece, “The Human Game”. Deftly creating a relaxing atmosphere through gentle, heavily effect laden guitars and a dark, sombre, spoken word performance, it turns the tables greatly when the distorted guitars kick in unleashing crushing, power chord driven riffs before restoring calm once again.

Contrive have always been on the fringe of the Australian metal scene over the years for a variety of reasons. They have always done things on their own terms. Continuing to adhere to that mantra, Contrive are again offering something different to the global metal scene and Slow Dissolve is their ultimate testament to that. Contrive have refined what they began seven or eight years ago and have come out on top with not only their best album to date, but also their most adventurous as well.