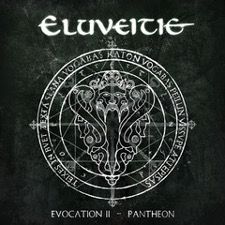 What can one possibly write about an album such as Evocation II – Pantheon by a band possessing as unique and distinct a sound as Swiss folk-metal titans, Eluveitie? Well, it’s good. Damn good. When I started writing the review I found myself reaching for words that almost describe the listening experience but end up falling short thus rendering the descriptor inadequate. It’s a position I have rarely found myself as a reviewer so it is rather unfamiliar territory. I actually fell back onto a philosophy that I use through the everyday in order to pen the review: I believe that if you cannot summarise a subject or experience using a single sentence then you are yet to grasp the key concept/s on offer.

On that note, how can I describe Evocation II – Pantheon? Beautiful and vast ancient Celtic/ Gallic inspired music performed by excellent musicians in a modern style, using heavy metal techniques to enhance the aural flavour of the listening experience. Sounds about right!

I had a chat to Chrigel Glanzmann, the band's main man and male vocalist for my podcast series prior to album launch and I wasn’t sure how the chat would go. For those out of the loop, three of Eluveitie’s members recently split and formed Cellar Darling. Cellar Darling in turn have produced an album (This is the Sound) that I will be listening to for many years to come. I decided very early in the chat with Glanzmann to bring up the line-up change and ask how difficult it was to find new band members, especially since Cellar Darling’s extraordinarily talented frontwoman, Anna Murphy, is virtually irreplaceable.

Glanzmann’s candour and praise of his former bandmates was heartening. This may not sound like much to the casual reader or listener yet I have observed that the maturity and manner in which a band can split with members is often directly proportionate to the quality of the music they go on to produce. The rather bizarre factoid that Glanzmann offered is that it was ‘easy’ to find replacements for Anna, Ivo Henzi (guitar), and Merlin Sutter (drums). That information was not offered in a churlish manner either; Glanzmann almost casually mentioned that he found studio musicians to hire for upcoming shows and they simply stayed on as members. That explains how he found Alain Ackermann (drums), Jonas Wolf (rhythm guitar), Michalina Malisz (hurdy-gurdy) and the sublime Fabienne Erni (vocals, Celtic harp, mandola)

Now I have been in local cover bands and scrambled to find average replacements for ordinary musicians for gigs that I had pre-booked at pubs and clubs across South East QLD. How on earth did Glanzmann and his cohort manage to find excellent musicians to replace outstanding band members for the task of performing Eluveitie’s delicate sounds to thousands of avid punters across the stages of Europe, then produce an outstanding album?

It says a lot about the man and his attitude that the ‘right’ musicians are drawn to him so conveniently. Respect!

To the casual listener more interested in riffs and blast beats I will offer that the unifying element to heavy metal on Evocation II – Pantheon’s DNA is through the excellent drumming, percussion and the occasional death growl from Glanzmann. If the instrumentation were to be refocused onto the electric guitar, then more traditional metal may follow, but that would defy the reason one would listen to Evocation II – Pantheon: The splendid sounds of the violin, hurdy-gurdy, pipes, whistles and harp actually carry the lush arrangements. To be sure, Eluveitie create intense music using folk instrumentation via a ‘more is more’ approach to adding said instruments to a movement or arrangement.

Now I realise I have not been overly descriptive of the listening experience itself.  Go back to my comments in the third paragraph for the reason and I encourage you to listen to the album via your choice of streaming service and listen for yourself.

Evocation II – Pantheon is metal on a mission, it serves to push metals boundaries ever outward. This isn’t an album that will replace the listening experience that Deicide’s epic Ralph Santolla powered The Stench of Redemption (’06) offers, however a vinyl copy will sit very nicely in my collection alongside that death-shred masterpiece.

Finally, Glanzmann is to be congratulated for re-grouping, co-writing and delivering an epic historically themed album that is genuinely different from all that surrounds it in the world of rock and metal today.