The Place I Feel Safest 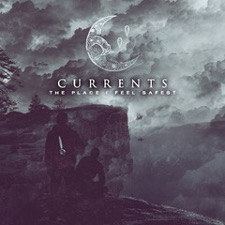 When I had the chance to converse with Currents vocalist and front man, Brian Wille, for an interview, I was struck by how young he sounded. That’s a compliment as the musical output on The Place I Feel Safest belies both the band's experience and their average age here on planet earth.

In 2017; Emmure, Volumes, Miss May I, and now Currents have released albums that give me reason to feel enthusiastic about the direction the next generation of musicians are steering heavy metal toward.

When the likes of Metallica, Maiden, and Megadeth have reached the apex of their performance reality and cease touring, the mentioned bands will certainly be offering stellar heavy metal that will afford them the opportunity to succeed the founding fathers on main stage.

The rather politically charged title of the album confounds a little and the narrative of the album’s heading is rather misplaced when listening to the progressive metalcore on offer. Maybe a more appropriate title would be “The Place I want to Break Shit” or “The Place I combine neo-classically influenced guitar breaks over djent inspired riffage”.

Wille’s lyrics will appeal to the socially awkward and introverted, he reminds me of the young bloke I frequently get chatting to at a gig between performances in one of the many cover bands I have been a member. Said young fella approaches with respect, asking questions about gear and ‘how did I get to play in a band’, before sharing that life sucks just a little and that his girlfriend won’t return his calls or texts. I feel his pain and assure him that provided he wakes up the next morning, there’s another chance to make right the ills of the world.

That’s not a dig by the way. Just a heads up that the album has been conceived by artists that have a long and very bright future ahead of them provided they keep their collective shit together and don’t sweat the small stuff.

2017 has been notable for the truly outstanding guitar sounds and performances on albums released. When I conversed with Wille, I wanted to obtain as much information as I could about the bands guitarist Chris Wiseman, due to his exceptional playing on The Place I Feel Safest. Wiseman is a special talent. He along with maestro Josh Travis (Emmure), is another great pillar in the six (or is it seven, eight or even nine...?) string pantheon that may indeed mark ’17 as a high tide in new ideas, progression and evolution on the guitar. Without offending anyone (including the artists I am about to mention), you could give me a G3 travelling guitar circus of far too many notes that included the mentioned Travis, Wiseman, Adagio’s Stéphan Forté or Swedish ingénue Marcus Jidell any night over Vai, Satriani, Lukather, or any other guitar hero whose heyday commenced in the 80’s and 90’s. Maybe I have just been around the genre for too long to see any need to listen to Vai’s (at times) inane noodling or Satriani’s blitzkrieg note placement… at age 39 I have come to a point where I am starting to tune out to the old and into what is new and fresh.

Anyway, back to the review…

What are the standout album cuts? "Night Terrors", "Withered", and the title track all offer sublime instrumentation. “Withered” in particular has some Dime-worthy string bends. The drumming of Jeff Brown is rhythmically perfect and he sounds as though he and the production team spent hours refining the percussion’s mix. Bassist Dee Cronkite is doing a great job but he could offer some more notes and fretful bass runs here and there as he sounds like he can certainly play. Like so many metal bassists he could have been under strict instruction not to deviate from the melodic root notes, so I’m sure as the band gains experience he will find his voice and find a way to be heard.

The overall production is crystal clear without diluting the brutality the band intend on delivering. I couldn’t catch who produced the album (or maybe I didn’t google right) but whoever it is, take a bow.