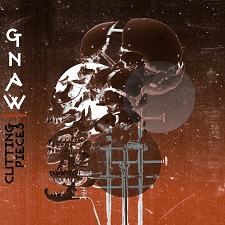 I like to think of myself as being a pretty adventurous listener with an eclectic range of tastes, but there are limits to that adventurousness. One band that stands at the edge of those limits is the now long defunct New York drone/doom project, Khanate, which I’ve spent a lot more time trying to like than I have actually liking over the years.

Despite never quite being able to comfortably slip into being a real, unreserved fan of Khanate, there's definitely something about the ideas they explored that has kept me trying over the years, and when I realised that Gnaw, who were previously unknown to me, featured Khanate’s Alan Dubin on vocals, my interest was well and truly piqued.

Whereas Khanate channelled their extremity through a very unpleasant form of tortured drone and doom, Gnaw takes an equally nasty approach but projects it through a kind of experimental, industrial noise lens. Dubin’s very distinctive vocal style and the harshness of Gnaw’s approach will bring inevitable comparisons to Khanate, but it should be stated from the outset that these are very different bands with very different sounds, and Gnaw is all the better for it from my perspective - if only because of the more manageable track lengths (there’s no 20+ minute songs to be found here!).

Cutting Pieces - the band’s third full length - is an album that takes a minimalist approach to its song craft, with each of the seven tracks tending to orient themselves around one core idea, and it uses its stripped back sound to emphasise the uneasy tension that exists at the heart of each and every song. There is undoubtedly significant risk involved in releasing an album as naked as Cutting Pieces can often be, but Gnaw more than amply demonstrate a deftness of hand at it.

I think the reason that Gnaw’s approach works so well is because they’re able to wring a lot of dynamics out of what they do by exploring and articulating the aforementioned tension within their music in a multitude of different ways.

Take the contrast between a track like "Wrong" and its immediate successor, "Prowled Mary", for example. The former is built around the interplay between Dubin’s distinctive vocals and the repetition of a rather simple droning, almost nondescript, riff that manages to bore itself into your brain over its seven-odd minutes. The latter song, however, opts for a much more understated approach, with Dubin whispering his lyrics over the sparse application of lightly strummed notes, what sounds to me to be a cello, and an ever present crackling sound effect. As the track plays out, you’re eagerly awaiting a release that never actually arrives.

Those two examples probably form the polar extremes of Gnaw’s arsenal, but they are far from an exhaustive list of the ways the band goes about its business. To the list we could also add the bursts of noise in the otherwise quiet, almost conspiratorial sounding opening refrains of "Rat" or the strangely muted industrial blasting during the first couple of minutes of "Extended Suicide", which I found to be vaguely reminiscent of Diabolos Rising’s "Mantle of Suffering" from Blood, Vampirism, Sadism (though is infinitely subtler).

Aside from creating a tense listening experience, what these examples and the many others also do is create an environment of unpredictability. I don’t think I’d go so far as to say that what Gnaw are doing is without precedent, but the fact that they are able to keep you guessing throughout the entirety of the album’s 45-minute duration is an impressive feat and is one that is far too rare.

I have to admit that it took me a good few spins of Cutting Pieces before the, um, pieces fell into place for me - it’s an abrasive listen that isn’t particularly welcoming and I just didn’t know what to make of it at first - but once it finally clicked, it’s continued to grow on me. If you’re partial to the more experimental side of the noisy equation, then I suspect it’ll do the same for you as well.