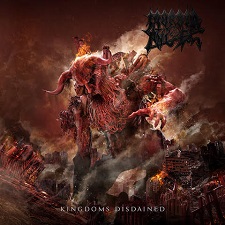 Though I personally think the lasting legacy of the first Tucker era of Morbid Angel is that it produced a lot of the patchier material in the band’s catalogue, the unmitigated disaster that was 2011’s Illud Divinum Insanus (which featured original vocalist/bassist David Vincent) made the news of Tucker’s return to bass and vocal duties an intriguing prospect, especially in light of the strength of his most recent Warfather release last year.

When news of a new album came to light, my hope was that Morbid Angel would be able to offer up something truly amazing that would not only wash the bad taste of the last album out of our collective mouths, but would also firmly establish that the band can have relevance outside of their past glory. To get it out of the way up front, no, Kingdoms Disdained is not the truly amazing album I was hoping for, but I think it does at least satisfy the other hope of showing that the band still has relevance in contemporary death metal.

From a compositional perspective, it’s conceivable that Kingdoms Disdained could superficially be seen as a close relative of 2000’s Gateways to Annihilation (especially with regards to its many groovier moments), but a closer examination reveals it to not only be far more vicious, but also rougher and infinitely more jagged in its assembly. Not only that, but it also features one of the heavier if not the heaviest productions I’ve heard on a Morbid Angel record (though unfortunately the drums and vocals are prioritised over the guitars, which is a pretty sizeable but ultimately not a fatal flaw in this respect).

An interesting contrast between Kingdoms Disdained and the three other albums that Tucker was involved with in the past is that Kingdoms is completely devoid of any of the kind of sampling/interludes/instrumental nonsense that bogged down those other three releases for me. While I’m definitely glad to see the back of these distractions, their absence does tie into a greater impression that I’ve had about this album: that despite the aforementioned jaggedness and aggression, there’s an overriding sense that Morbid Angel weren’t willing to take too many liberties or risks with this one. Considering the near universal panning of Illud Divinum Insanus, that’s hardly a surprise, but as I’ve continued to digest Kingdoms, I’ve been unable to shake the feeling that there’s just a little of the characteristic off-the-wall Azagthoth zaniness missing here; that maybe the pendulum has swung a fraction too far the other way towards safety. It's far from a deal breaker, but it's a feeling that keeps surfacing regardless.

Despite my qualms about the relative safety of Kingdoms Disdained, it’s been a long time since Morbid Angel has sounded as pissed off as they do here, and I’m glad there’s still a desire there that they can tap into. The driving fire can be witnessed in each of the players, with every one of the performances being of the kind of high quality you’d reasonably expect, but I think Tucker deserves to be singled out in particular both because of the ferocity of his performance and the sheer energy it brings to the material. There's a vitality present here that adds so much to the enjoyment factor.

While I've only been listening to Kingdoms Disdained for a week and am still digesting it, I feel comfortable enough at this point to say that while it may not be an excellent album, overall it's a pretty good one. It's definitely not without its warts and I do think the quality of the songs can vary quite a bit, but when taken completely at face value with all the other baggage left by the wayside, Morbid Angel has done good work here.