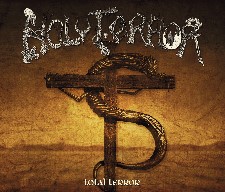 Holy Terror were truly an underground thrash band. Sure those heavily in the scene in the mid to late ‘80’s knew of them, and whilst their output was put out by Under One Flag and Roadracer Records back in the day, they never really made it to the level of the second and third tier thrash bands like Testament, Death Angel, Nuclear Assault, Forbidden and Vio-Lence. They, along with label mates such as Hexx, Re-Animator, Acid Reign and Blind Illusion amongst others, made the grade on the fourth instalment of the legendary Speed Kills… series which came out in 1989.

Formed in 1986 in Los Angeles (California, U.S.A.) by ex-Agent Steel guitarist Kurt Kilfelt (real name Kurt Colfelt), the band’s tenure would be short lived with only two full length albums to their name before disbanding in 1989. The result was somewhat of a cult following that would see their 1987 album Terror & Submission and their 1988 album Mind Wars remastered, repackaged and released as a two CD set by Powerage Records in 1998. However that release, and the subsequent re-re-release by Candlelight Records 11 years later, contained a mastering glitch just after the 4 minute mark in the track “Judas Reward” from Mind Wars.

After all those years, Holy Terror remain as one of the cult thrash bands of that era. U.K. company Dissonance Productions has taken it upon themselves to release what can only be considered to be the definitive Holy Terror collection. Dubbed Total Terror, this mammoth release not only contains Holy Terror’s first two long players flawlessly (ie. with no mastering glitches), it also includes the groups entire 2006 release El Revengo (which includes the live disc Live in Dendermonde) and a rare DVD that features various performances, the band's official video for "Judas Reward," and other outtakes. I think it’s fair to say that Total Terror contains everything you could ever want as far as Holy Terror goes.

The albums sound good and the aforementioned mastering issue is no longer present. The music itself is clearly rooted in the ‘80’s thrash era and the production reflects that as well. The live album sounds totally raw and abrasive but the performance is unbelievably intense and every element of the band’s sound and their frantic take on thrash metal has been captured perfectly. The DVD is the icing on the cake containing three bootleg performances of Holy Terror live in Milwaukee, Chicago, and Anaheim in the late ‘80s. The quality isn’t the best at times both visually and aurally – think of a slightly poorer version of Metallica’s Cliff ‘Em All home video from back in the day. Considering given the band’s short lived tenure and their cult thrash status, the inclusion of this material certainly bolsters this boxset completion status. It would have been the definitive Holy Terror collection if only their 1986 Demo had been included as well. It is the only thing of note that hasn’t found its way into this collection.

This is as good as it gets for fans of Holy Terror. Total Terror is a complete collection that delivers everything in one location. For those curious about the band or with an interest in the lesser known thrash bands from that era, this is the place to start when it comes to Holy Terror.