Exile Amongst the Ruins 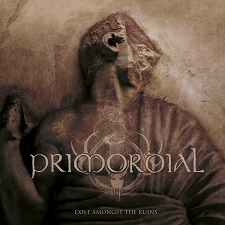 Despite having been around for over 20 years now, I have to admit to being pretty late to the party with Ireland’s Primordial. In fact, it wasn’t until I took the chance on seeing them at a festival in 2015 that their idiosyncratic folk-cum-black metal sound really clicked for me, and click it most certainly did.

For years now, Primordial’s greatest strength has been the driving force of Alan "Nemtheanga" Averill’s stoic yet mournful vocal delivery and lyrics leading the band’s stirring compositions, and though this may be incorrectly construed as being a criticism, I don’t think it’s unfair to observe that the band found its sound a long time ago and has remained quite steadfast in sticking to it. This is something that I would ordinarily ding many, many other bands for, but somehow Primordial has managed to make it work, perhaps simply because the underlying idea is a pretty bloody good one.

With that having been said, though, album number nine, Exile Amongst the Ruins, demonstrates that while the idea may remain good in principle, it still requires effort on the part of the band to realise it in album form. To put it bluntly, Exile Amongst the Ruins is an uncharacteristically uninteresting and uneventful album from the otherwise reliable stalwarts.

The funny thing about Exile Amongst the Ruins is that superficially it doesn't really deviate from standard Primordial fare all that much. The aforementioned contributions from Averill and co are largely in line with what anyone familiar with the band would expect to hear and, thematically, we have ample doses of empires falling, triumph over adversity, and everything else that is quintessentially Primordial in nature. The difference this time around is that the package is surprisingly stale and underdeveloped.

To be honest, I'm really not super fussed about the lyrical themes being predictable here because they've been predictable for years, and I would argue that they are probably as important an element in Primordial's overall make-up as anything else. Ordinarily I wouldn’t even bother to bring them up at all, but when they’re taken in conjunction with a set of songs that are as broadly boring as the eight featured on this 65-minute album are, then it seems fair to give them additional scrutiny in the context of the larger point.

Opening track "Nail Their Tongues" is a solid beginning to the album, and while it doesn't bring us anything that deviates from what we've come to expect from Primordial, it's a perfectly fine beginning that's as comforting and familiar as a favourite blanket can be. Unfortunately, though, it also happens to be the best track on the album by far.

From this point on, Exile Amongst the Ruins becomes a very mixed bag of some alright moments interspersed with many more that either don’t hit the mark or that completely overstay their welcome. "Where Lie the Gods", for instance, starts out promisingly with a sombre, mid-paced riff that ultimately winds up spending nine minutes going absolutely nowhere. Similarly, "To Hell or the Hangman" features an enjoyable upbeat tempo that the band seems unsure of how to utilise so it is effectively recycled over and over for the next seven minutes. Most offensive, however, is "Sunken Lungs" which is easily the worst song on offer with the bafflingly poor choice of beats from drummer Simon O’Laoghaire and the sparse nothingness of the accompanying riffs. How this song made it past quality control and onto the album is truly beyond me, but, if nothing else, it speaks to the greater quality problems at the heart of the album itself.

Even the best, most reliable bands have their stumbles, and this is definitely a major one for Primordial. This is an album that does a disservice to an otherwise strong back catalogue and one can only hope that the band can iron out whatever it was that contributed to making it so before the next album comes around.