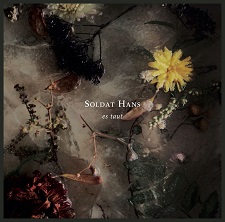 Over the years, I’ve found it to be beneficial to be sceptical of the descriptions that are contained in the promotional blurbs for the promos that are sent my way. Though they’re clearly intended to be a guide and to pique interest (to stand out in a very saturated environment, in other words), I don’t often find that they accurately or completely reflect the albums they purport to describe.

My scepticism was in full swing when I read over the blurb for Es Taut, the second full-length album from Switzerland’s Soldat Hans, which marketed the band as mixing elements of doom, post-rock, drone, and dark jazz. On paper this is something that sounded like it would be right up my alley, but I’ve been burnt before. Not so this time, however, because not only was the blurb remarkably accurate, but Es Taut is by far the most interesting and enjoyable album I’ve heard thus far in 2018.

Consisting of three very diverse tracks, Es Taut is a difficult album to place into a neat descriptive box, especially when there are so many different styles and approaches at work across its 55-odd minutes. To my ears, though, Soldat Hans could be loosely described as sounding like what Godspeed You! Black Emperor or Silver Mt. Zion might sound like if, every now and then, they projected their music through the lens of the kind of doom and post-metal that a band like Amenra plays while occasionally making a detour into ( ) era Sigur Rós. This alone is a potent combination, but it doesn’t even come close to telling the whole story.

To wit, 26-minute opening number "Story of the Flood", is a sprawling and richly layered piece that draws liberally from the aforementioned post-rock and post-metal genres while also incorporating elements of jazz (by way of some really excellent trombone work), progressive rock, and synth influences, amongst others. Though several of the individual movements are often delicate and even understated at times, the care with which they have been constructed is truly stunning; the way this lengthy song unfurls and transitions through numerous peaks and valleys, crescendos and diminuendos, so seamlessly and masterfully is no small feat. In addition, Soldat Hans, despite having so many influences, clearly understand that less is more often than not actually more, and demonstrate this by exercising a lot of performative restraint, only using the instruments that are absolutely necessary in any given moment and not falling into the trap of utilising everything at their disposal just because it’s available. It’s a mature approach to composition and it exemplifies the skill and experience within the ranks of this sextet.

I could go on and on about the little gems and surprises that await you should you take my advice and check this album out, but to limit it to one more example of just how diverse Es Taut is, "Schoner Zerbirst Part I", with its relatively trim eight minute running time, largely eschews the litany of styles present on “Story of the Flood” and instead brings together a cappella, psychedelic rock, and moments that wouldn’t sound out of place on The Beatles’ Sgt. Pepper’s Lonely Hearts Club Band. I won’t get bogged down in the minutiae, suffice to say that these disparate elements work together brilliantly.

Clearly I absolutely adore Es Taut, and there’s so much more that I could say about it, but I recognise that it will not be an album for everybody. It isn’t an easy album to digest and it requires the listener to be willing to relinquish control and let Soldat Hans do what whatever they want to do on their own terms. I have no doubt that this will be a turnoff for some people, but if you are into experimental music, or would like to be, then I cannot recommend Es Taut to you strongly enough.