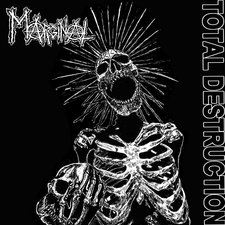 To say anything is ‘old school’ has gotten a bit tired, but when it comes to Belgium’s Marginal who kicks it seriously old school with their brand of grindcore/crust punk, it just seems fitting. This is a sound, whilst fully benefiting from present-day technology, is as raw as grindcore and crust punk gets. Frills are for the soft. This is grazing your knee and rubbing dirt in it.

Marginal is a quintet from Antwerp with a couple of LPs under its belt already, having made some noise since 2014. Any unsuspecting listener and fan of grindcore/crust would be forgiven for thinking these guys were some underground band from the 1980s. The band’s soundtrack to a solid middle finger against social injustice and political perverseness harks back to the likes of Napalm Death and Extreme Noise Terror from the organically rotten days of the 1980s. There are also noticeable influences of straight-up d-beat defiance which reeks of that aggro crust punk Discharge sound.

This is also to say that, in looking at Total Destruction in its entirety, Marginal may not be dishing up anything groundbreakingly fresh but they certainly are taking a proven recipe and nailing it to the letter. Furthermore, the musicianship is tight and production resolute. The song structures are not all that dynamic – there is raw intent and steadfast direction which does enough. Even in instances like ‘’Rat Kebab’’ and the closing title track which venture into the 3-minute-plus realm, there is simply more meat on the bone without the sophistication of added herbs of spices.

The riffs alone on this album are enough to get a horde of heads banging, and to this extent the album is already a success. But it’s the pearlers like the 80s-rich ‘’Useless Scum’’ which makes Total Destruction such a worthwhile listen. The crust punk, sledgehammer moments like ‘’I Used to be Intelligent’’ and ‘’The Violent Way’’ are direct and scorching, while ‘’Delirium Tremens’’ and ‘’Leech Invader’’ pack a venomous punch.

2017 was not been a great year for metal, but there are those comforting moments – and not the big, ballsy ones but rather the more visceral ones rendered even more exposed and vulnerable. This effort from the Belgians falls into the latter category. All fans of grindcore/crust need to check out Total Destruction.